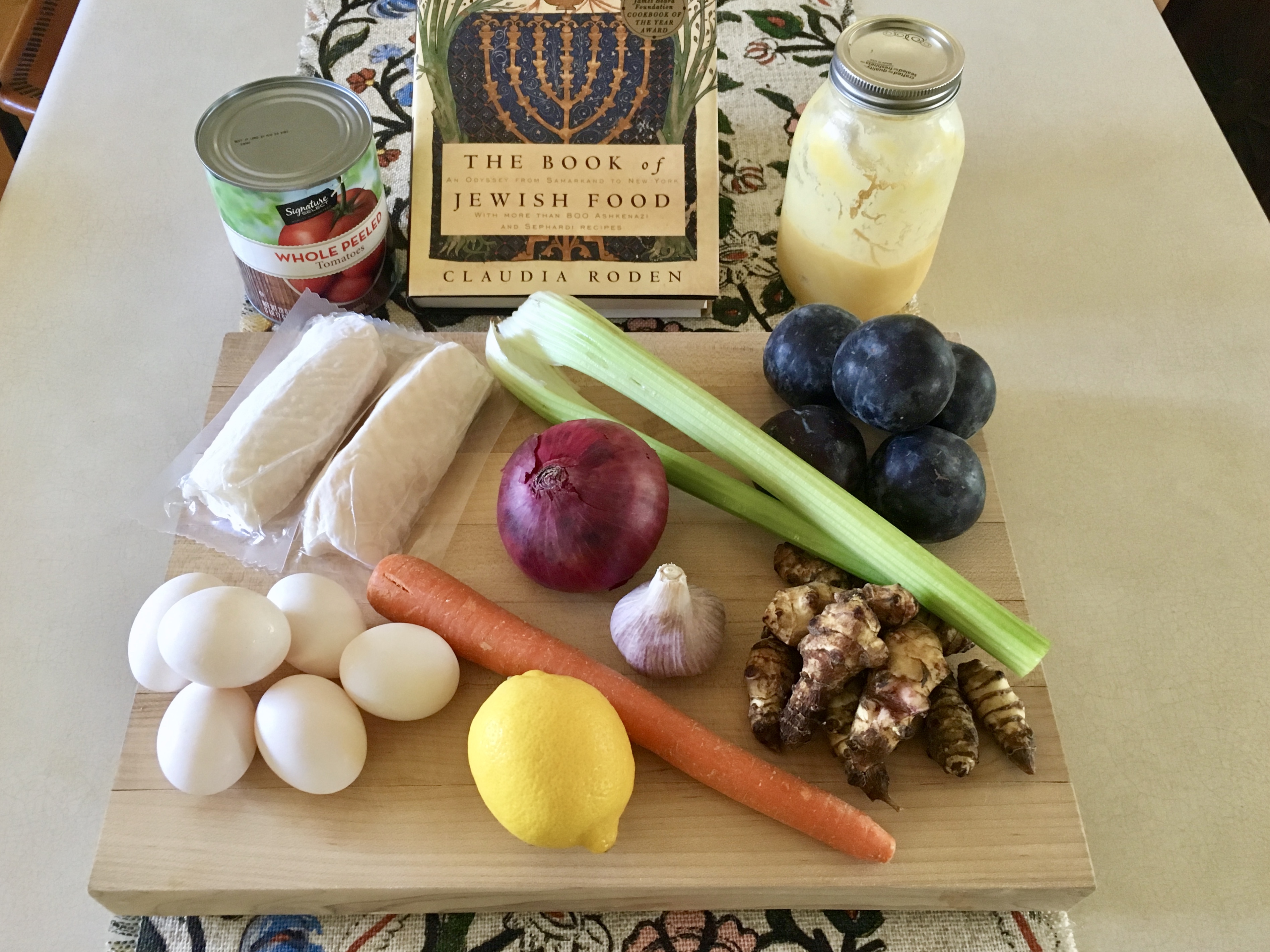 Halibut with Egg and Lemon Sauce

Welcome to Made in Marrow’s 25th meal! This week’s numerically big dinner is marked with a couple of ingredients with which we have never worked before, including Jerusalem Artichokes and putting pluots in a noodle. But despite these new and very interesting ingredients, this week’s meal (spoiler alert!) fell a little flat. Don’t get us wrong, it was not inedible (unlike that oh-so-memorable liver from several weeks ago), but was just not a hit in our house. So we will hold off on the introduction exposition this week and just get straight to the cooking. We hope you enjoy this week’s caper in the kitchen!

We had always seen Jerusalem Artichokes in the store during the summertime but were never sure how they were used or what they tasted like. Similar in taste to both a potato and an artichoke, these tubers migrated to Europe at the beginning of the seventeenth century from North American, becoming quite popular with European explorers returning home. Surprisingly enough, these vegetables have nothing to do with Jerusalem, which is a stretch of their Italian name girasole articiocco – articiocco because their flavor resembles an artichoke and girasole (sunflower) because the plant produces a flower whose head follows the path of the sun. It can also be found under the names sunchoke and earth apple and is used in some regions as a folk remedy for diabetes, as it is rich in the carbohydrate insulin. 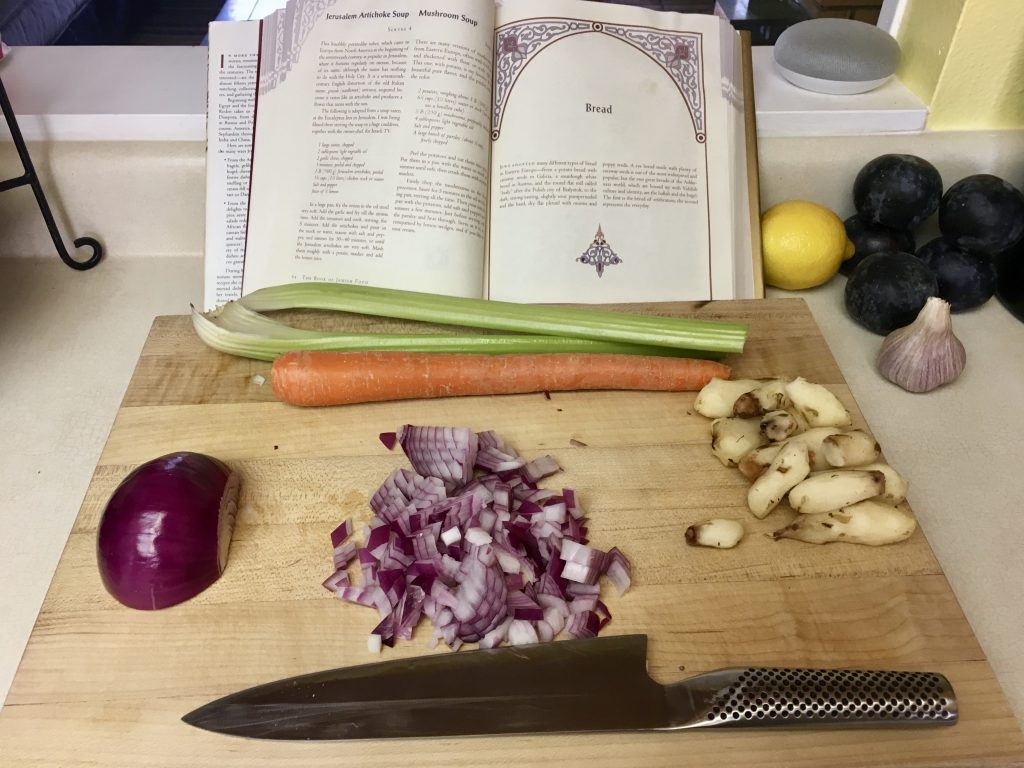 Prepping simultaneously for both a side and a main…

Jerusalem Artichoke Soup’s main ingredient is (you guessed it) Jerusalem Artichokes, for which I spent 15 minutes peeling these tiny tubers. The onion was fried until soft along with garlic, after which tomatoes were added and chicken stock was poured over all. The “artichokes” were dropped in and simmered for 40 minutes, with just salt and pepper as seasoning. When the artichokes were soft, they were mashed roughly (as in size, not in manner), and the juice of half a lemon was added to the final dish. 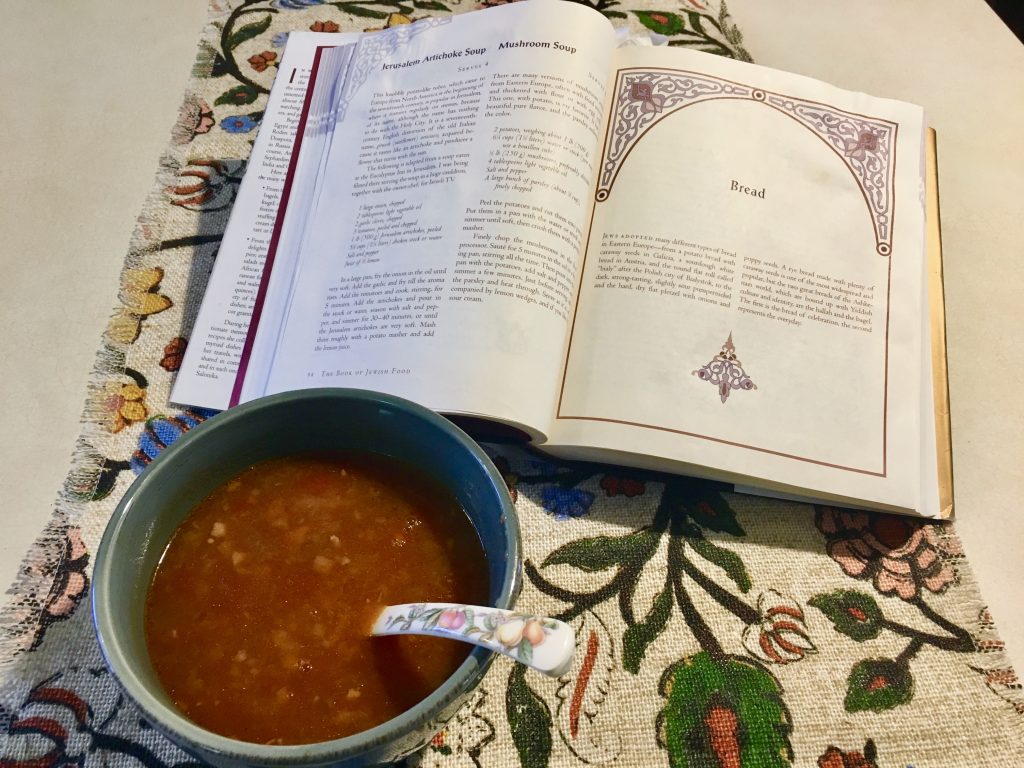 I thought this soup was perfect – Gary thought it needed meat…but being a vegetable soup, he thought it was passable. The Jerusalem Artichokes had a slightly sweet, nutty flavor, which balanced well with the bright acidity of both the tomatoes and the lemon. The texture was “rough” in chop, creating a soup with texture, but also a slight amount of velvetiness from the simmered tomatoes. Since we did not really know what to expect out of this soup, it turned out to be quite a tasty hit!

Halibut with Egg and Lemon Sauce

Claudia Roden writes that this Anglo-Jewish dish is a legacy of the early Sephardi community, which is fitting, as we will be moving into the Sephardi section of the cookbook in just a few short weeks. She also notes that any other white fish can be used in this recipe, so we chose cod as we had it handy the freezer. 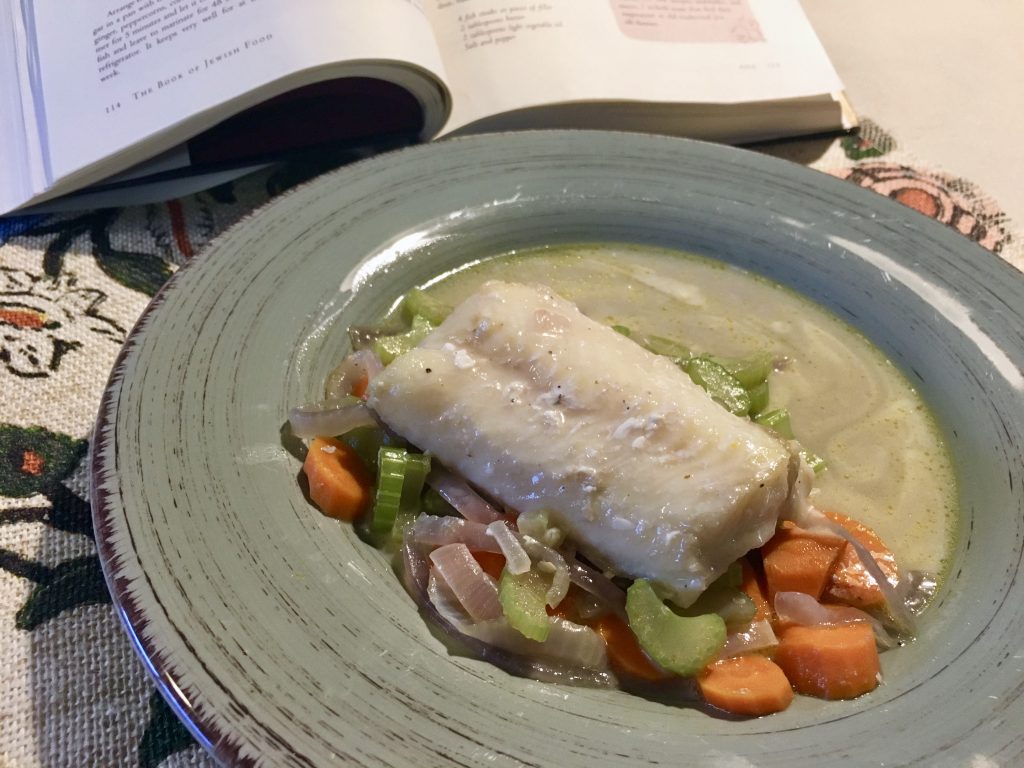 Not only did this fish fail, but so did our photography skills, as this was the only photo taken!

Onion, carrot, celery, and bay leaves were simmered in water in a pan for about 10 minutes. After this time, the cod steaks were added and very gently simmered for 10 minutes, creating a stock for the sauce that would top the fish when served. After the fish had simmered, some of the stock was ladled off and combined with cornstarch, beaten eggs, and lemon juice and then added back to the sauce. Roden notes that the sauce will thicken, but uhhhhh….it never did! Having quite the angry history with hollandaise sauce, it was really no surprise that this did not work like it should, so, unfortunately, the sauce was just not the right constancy in the end. Overall, this entire dish fell flat, being surprisingly bland, despite the veggies and lemon, so perhaps more than sauce consistency went wrong…

This recipe marks the last recipe in the “Noodle” portion of the Ashkenazi section of the Book of Jewish Food. It also worked out that we left it for last, as pluots just started to appear in the grocery store. I decided not to choose between plum or apricot for this ravioli and went for pluots, which is a hybrid fruit combination of a plum and apricot (pretty clever, right?). I am not sure if that the Russians would approve of this non-choice choice since this ravioli was created in that region, but we decided to go for it in this savory fruit dish. 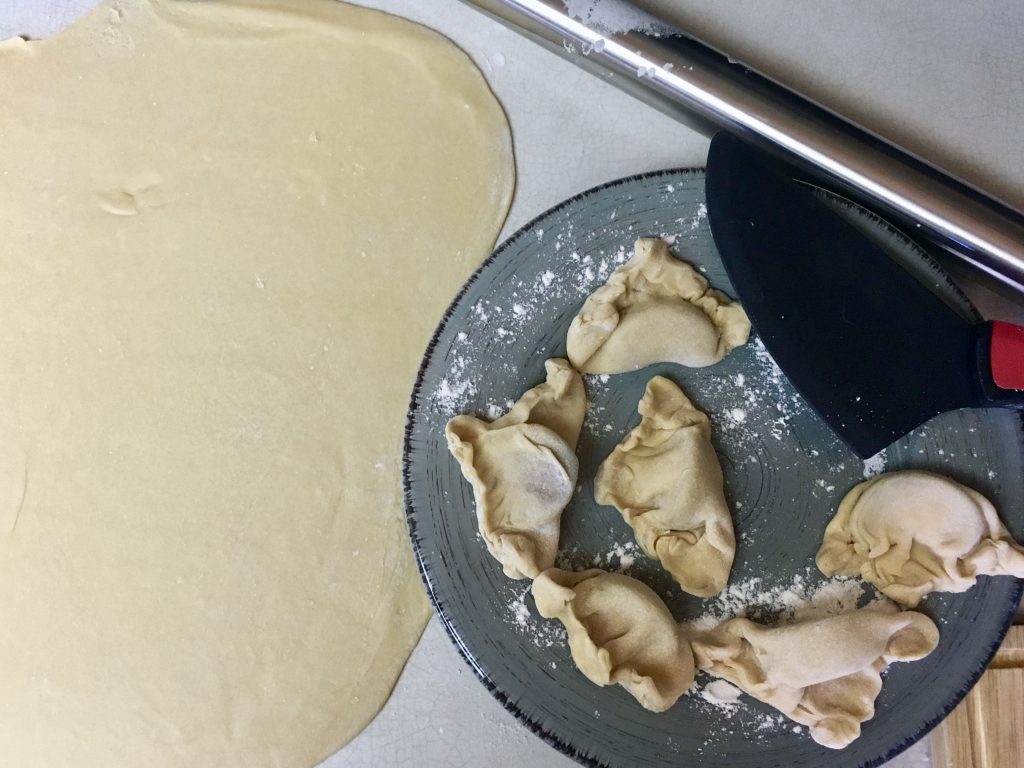 First off, we had to make more pasta dough, which we had a little experience with from our Cheese Kreplach a couple of weeks ago. Eggs, salt, and flour were combined to make a dough, which rested for 20 minutes. After this time, the dough was portioned into two, and rolled out as thin as humanly possible (well as thin as possible for this human). The dough was then cut into rounds and an eighth of a pluot was placed in each round. The fruit noodle was then folded over and shaped (misshaped?) into a kind-of-sort-of roundish triangular ravioli. These were then boiled for about 15 minutes until cooked through. 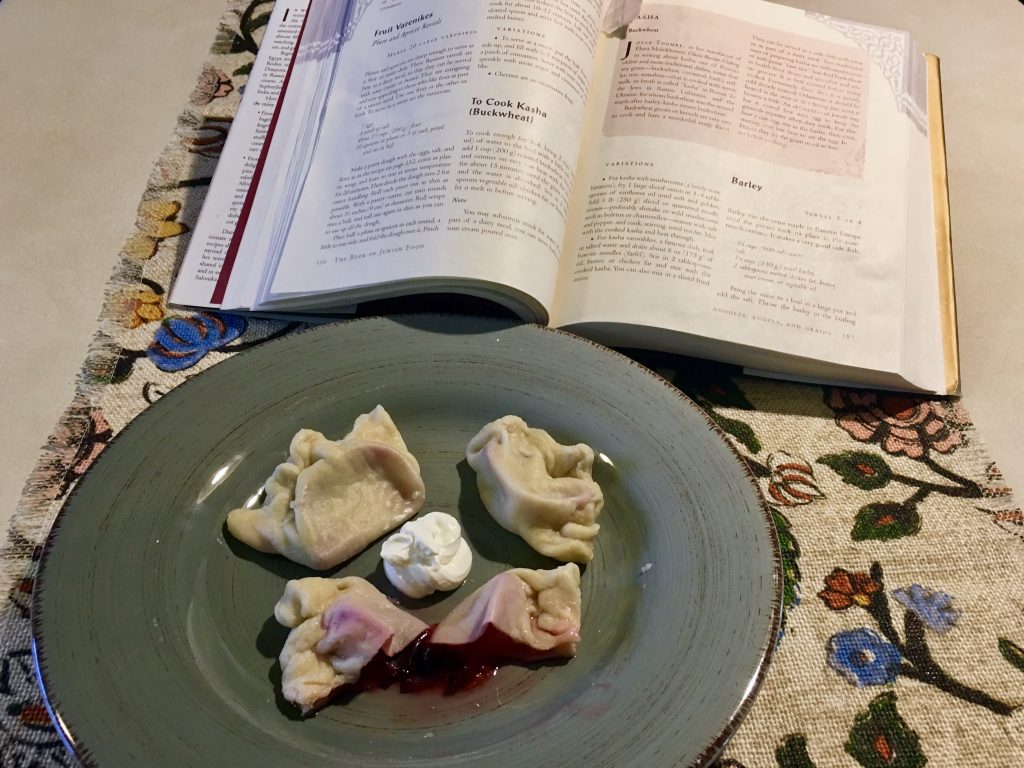 A very colorful fruit side dish!

Luckily none of them exploded and all of the ravioli remained intact throughout the cooking process. We ate them with sour cream, which made them feel a bit more akin to pierogis than ravioli. The pluot fillings were just tart, bright, and sharp enough to balance their doughy exterior, and were actually quite tasty. Unfortunately, they greatly overwhelmed the already bland fish, but we could see how these would make a fun and different accompaniment to other more savory protein main courses.

These little pastry bites are often consumed during Rosh Hashanah, which is Jewish New Year. Foods commemorating this event often include honey to symbolize a sweet new year. For this recipe, we made even more dough, combining three eggs, oil, salt, baking powder, and flour, and then kneading this mixture for ten minutes until smooth and elastic. This was refrigerated for half an hour and then rolled into pencil-thin ropes (well, the kind of pencils you give to kindergarteners working on their motor skills – also, probably a big mistake on our part). 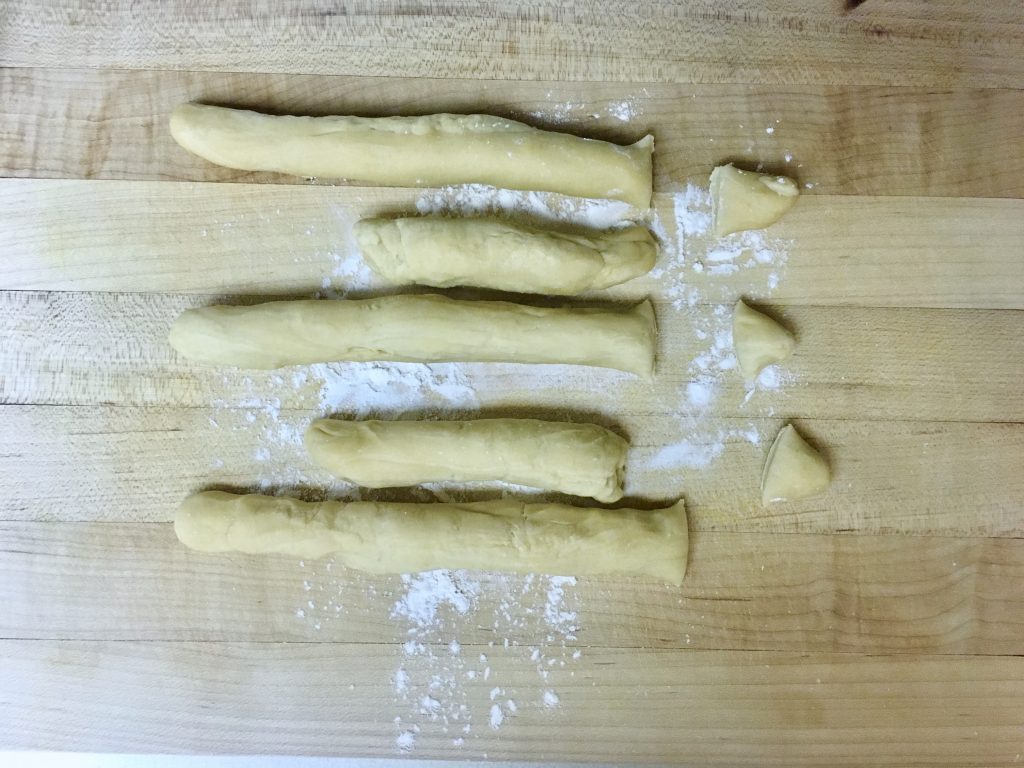 Honey was boiled with lemon zest and ginger (which smelled heavenly) and then the too-thick dough was sliced into tiny pillows and placed in the golden mixture. These segments were simmered for 30 minutes (it was supposed to be 15, but they still had not cooked through) and then sprinkled with walnuts. 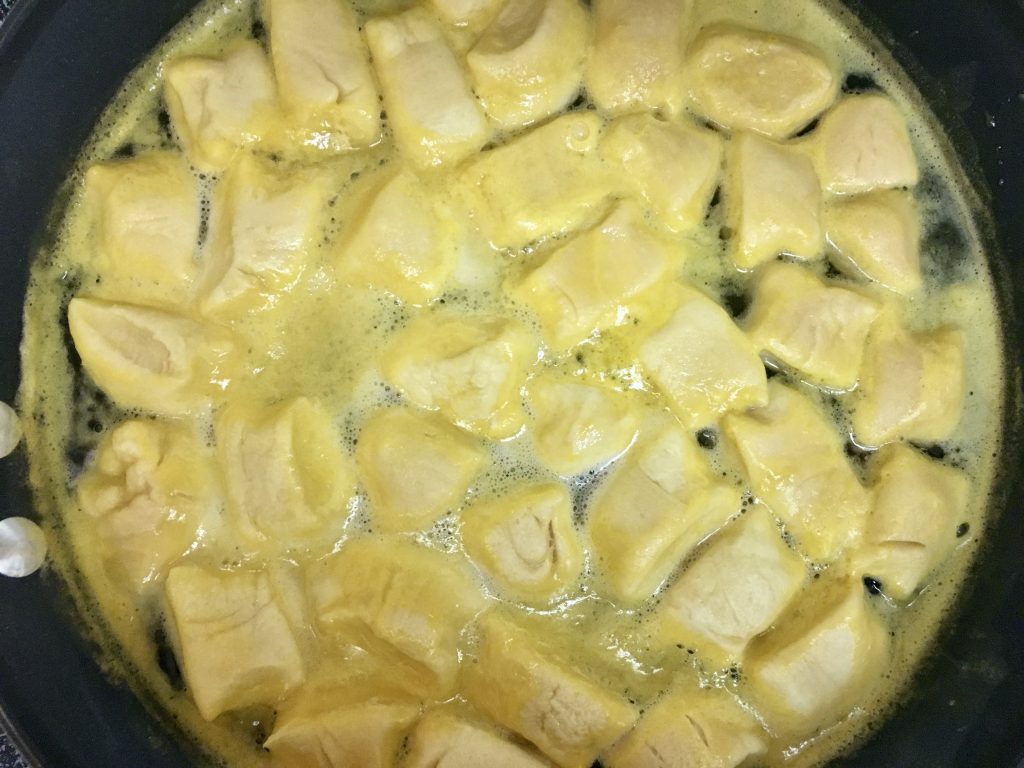 When warm, these little pastry pillows tasted alright, but when cold they tasted like hard pieces of cooked flour. Obviously, we did something wrong, because after we googled them, we found what looked to be like scrumptious towers of honeyed treats, not beige squares of sadness. Not a great way to end the meal, but we will definitely keep an eye out for these at Jewish bakeries in the future because they sure did look delicious online! 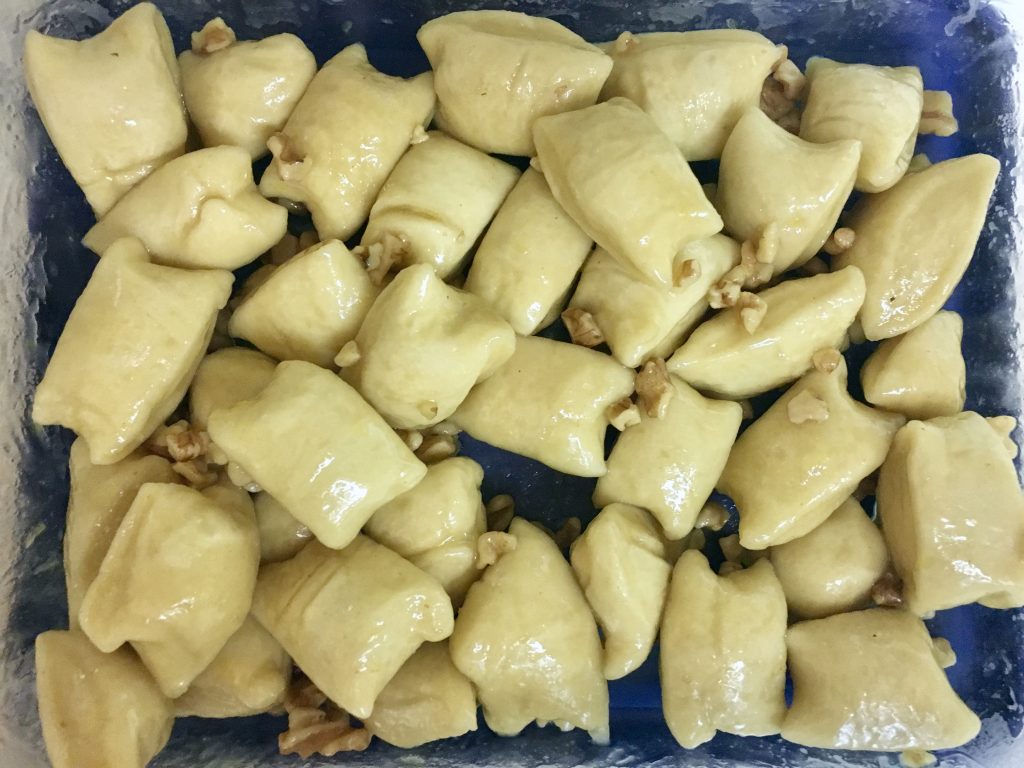 Unfortunately, these look better than they tasted…

So how was Made In Marrow’s meal number 25? As a reminder, our rating system is based on sticks of butter (because butter is best!), with 1 being the absolute worst and 5 being out of this world. Sticks of butter are assigned to Difficulty (how many kitchen fights were needed to complete the meal?), Tasty Goodness (was it a palate poor or did it make our mouths merry?), and Repeat Customer (how likely are we to return to the recipe?). 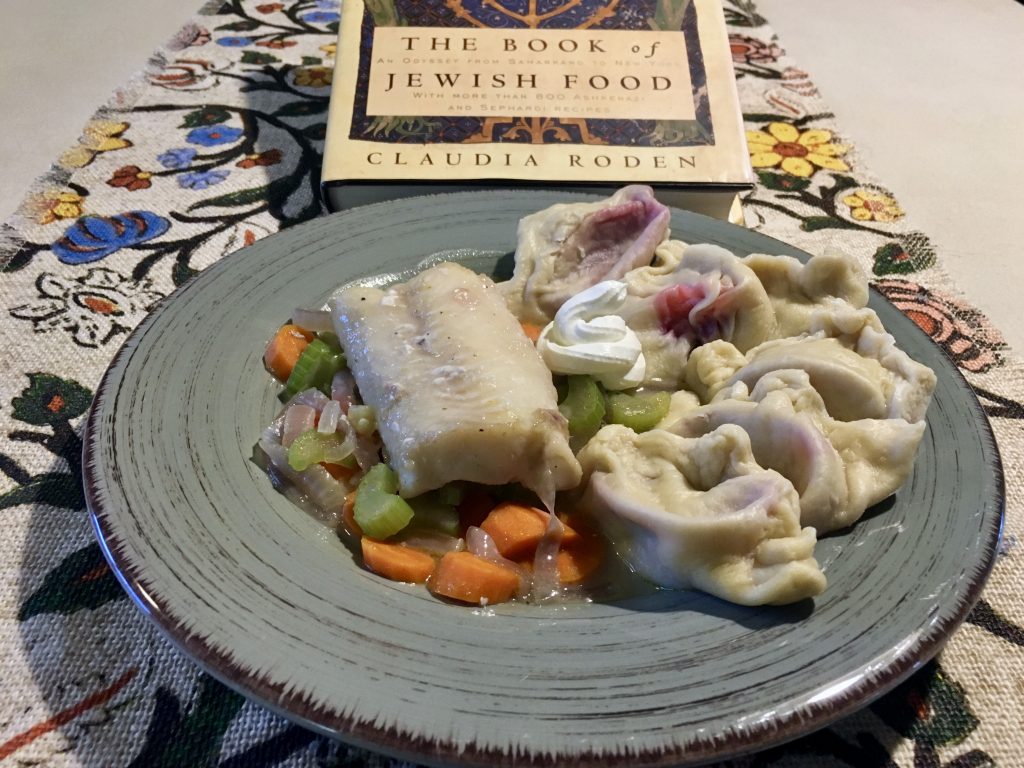 There were a lot of doughs to be rolled out for this week’s meal, which made it fairly time-consuming. And although the fish dish took only 20 minutes to cook, the preparation at the beginning and sauce making at the end made it more labor intensive than it appeared.

[][] 2/5 Halibut with Egg and Lemon Sauce – Besides the sauce failure, this dish was just far too bland

[][][][] 4/5 Fruit Varenikes – Plum and Apricot Ravioli – We would try this again, but paired with a more savory protein dish

[] 1/5 Teiglach – Pastry Nuggets Cooked in Honey – Probably not at home, but will keep an eye out to sample them at a bakery!

Not a home run this week, but never don’t despair, we have another meal next Sunday with which we get to wipe the slate clean and re-plate a new adventure!