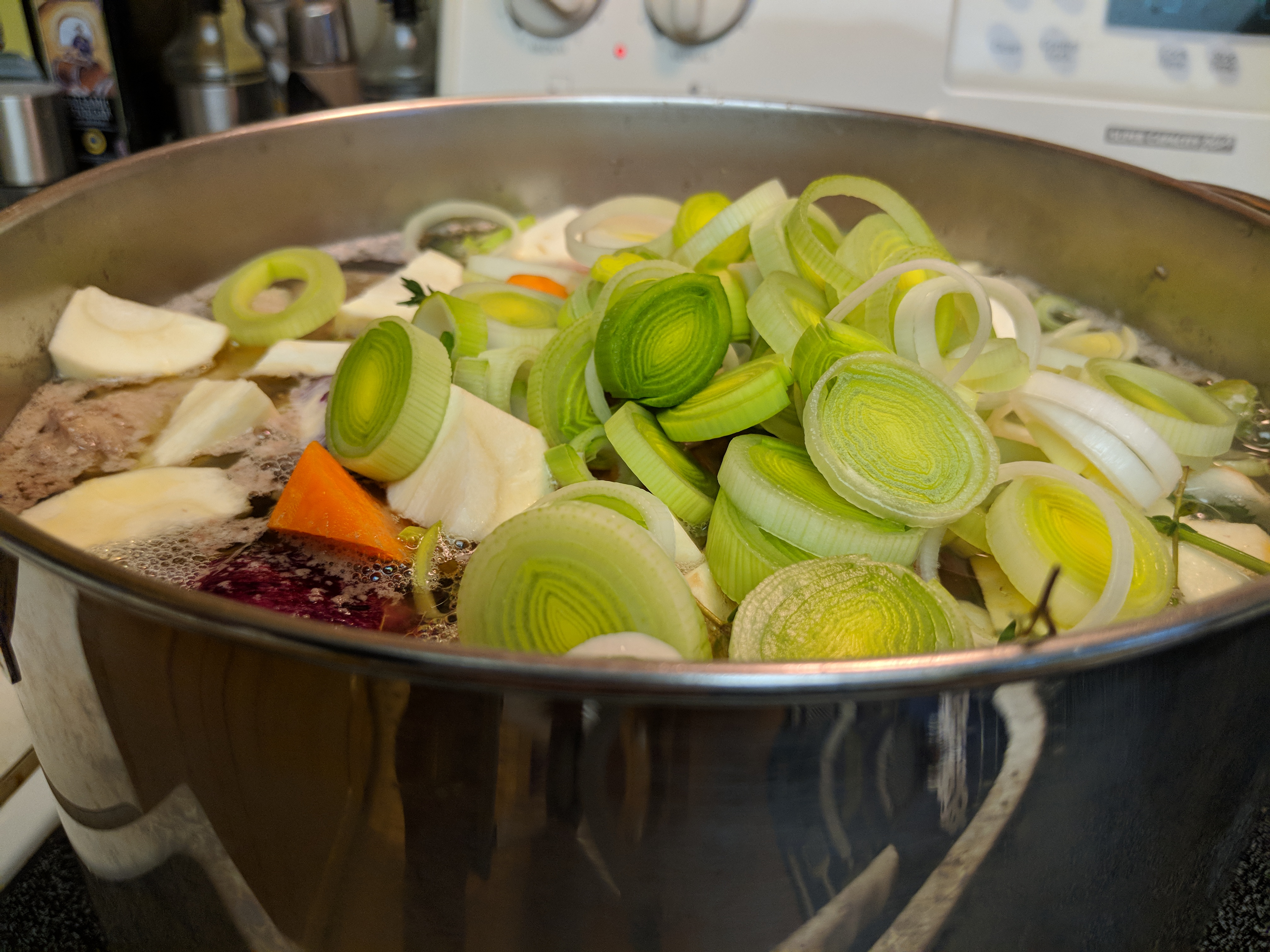 Our first food foray into The Book of Jewish Food by Claudia Roden was the following meal: Poule –au-Bouillon accompanied by Beet Salad, Hallah, and Lemon Sorbet. We literally chose these recipes because they were the first at the beginning of each of their section within the Ashkenazi portion of the book. For those of you who have forgotten (or did not read our intro – shame on you!), Ashkenazi refers to the Jews who originated in Western and Eastern Europe and Russia. These were amongst the largest communities to immigrate to Canada and the United States, which is why Gary and I were more familiar with this branch of Jewish cuisine. Peasant soups and aristocratic strains from France intermingle here, whose deep earthy flavors and delicate palate cleansers we found throughout this meal. Read on for our adventures, or if you just want to skip to the recipes themselves, simply click the title at the begining of each section. Enjoy! 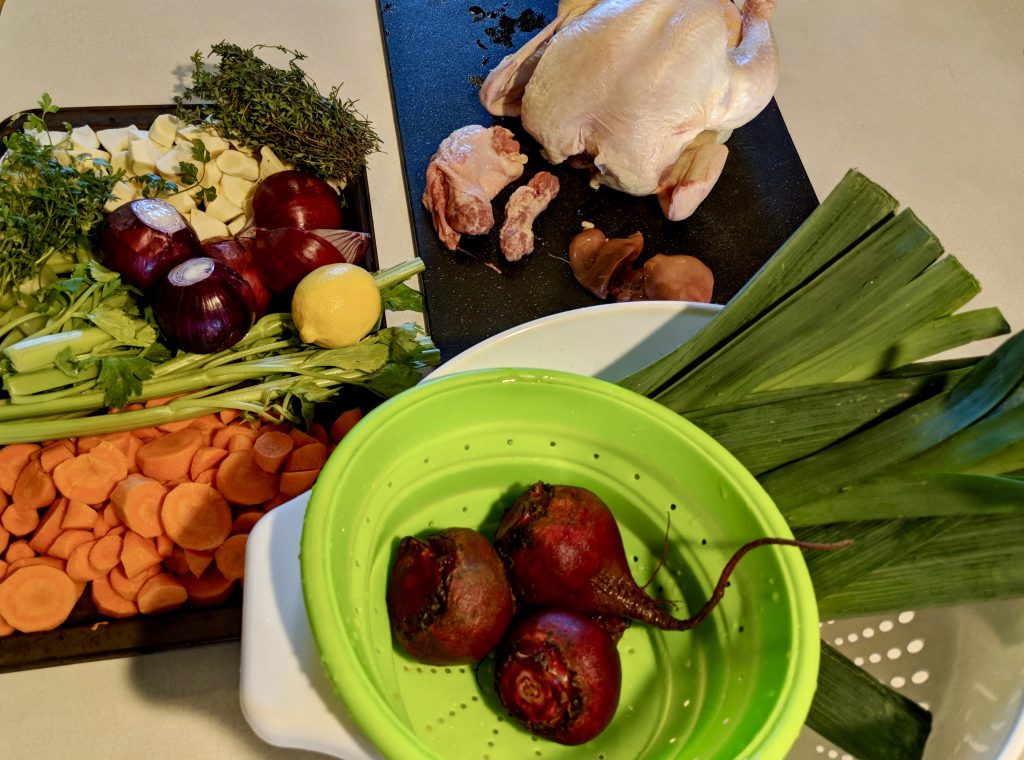 Ingredients for Meal #1 – These photos will get better, we promise!

We (me, myself, and I) started with the Hallah – braided Sabbath bread both beautiful in form and in flavor. Over the past couple of years, I have delved more deeply into bread, trying to perfect my french bread and get creative with differently seasoned naans and focaccias. Hallah is deeply rooted in Yiddish culture, being one of two great Ashkenazi bread recipes (the other which we will cover in future meals). Gracefully braided Hallah is the Jewish Sabbath and holiday bread. Just to review, the Sabbath (as taken from Google) is “a day of religious observance and abstinence from work, kept by Jews from Friday evening to Saturday evening, and by most Christians on Sunday” (it is also defined as “a supposed annual midnight meeting of witches with the Devil” – but I’m pretty sure we are going to stick with the former definition, although the latter sounds like heaps of fun). Hallah is special and festive, eliciting ritual and a variety of blessings. Hallah that are covered in poppy and sesame seeds are said to symbolize the manna that was miraculously supplied to the Israelites wandering in the wilderness, as depicted in Exodus. 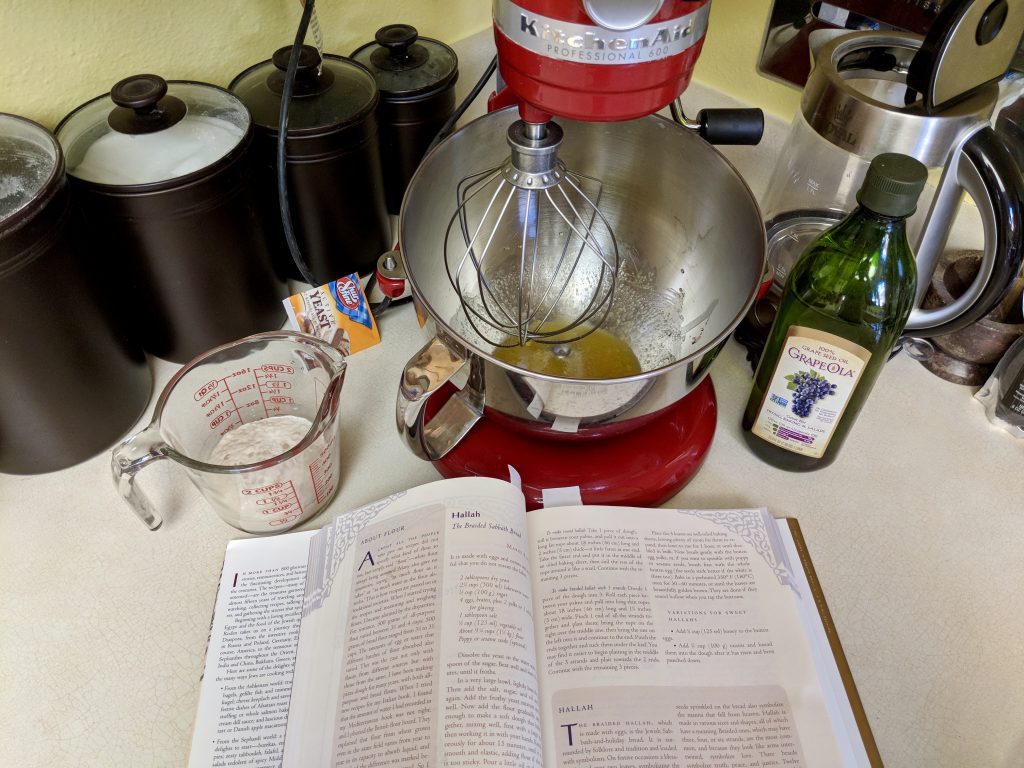 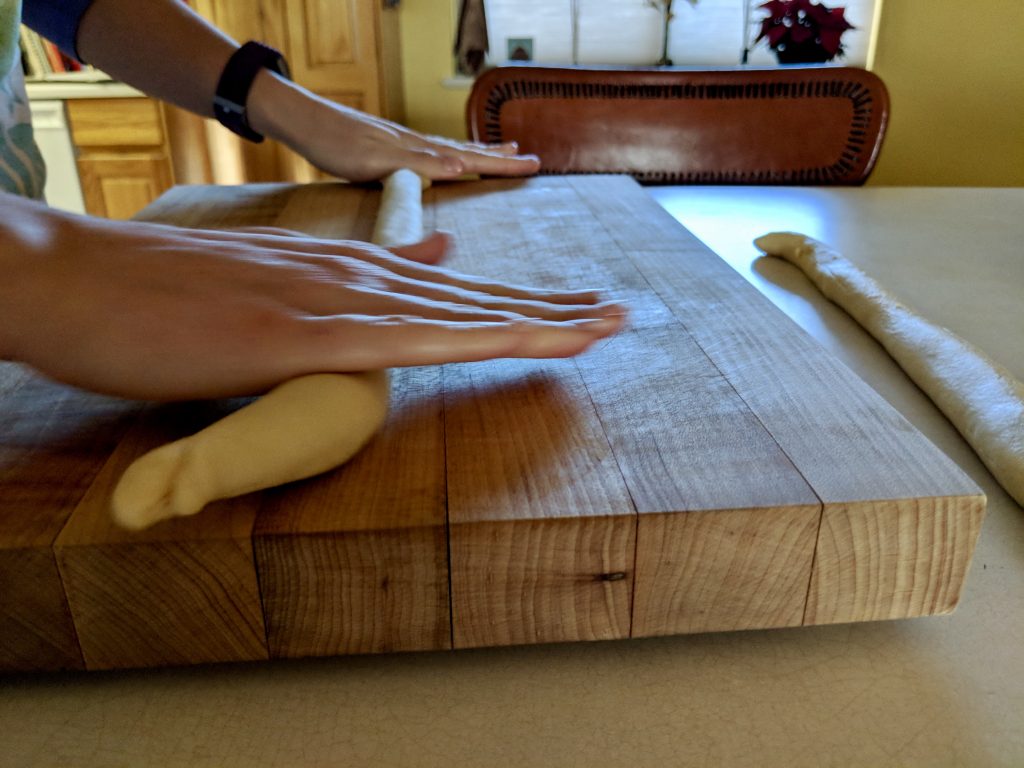 Rolling out my Hallah arms of love 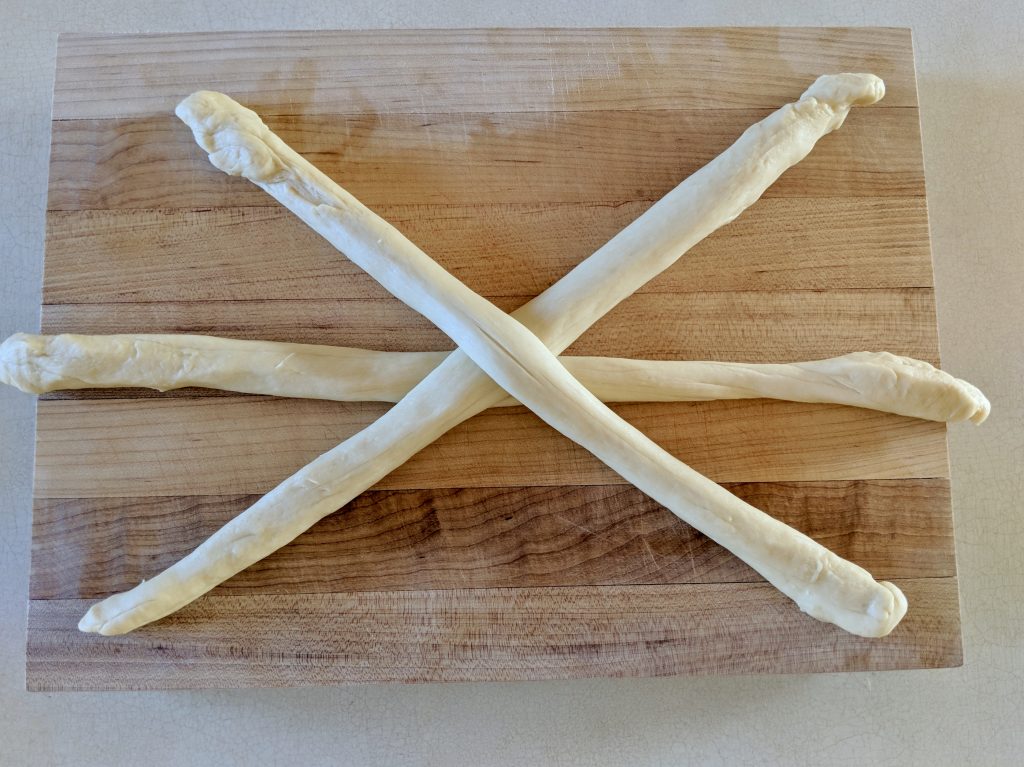 Much like Wonder Woman, our three portions of Hallah stand for truth, peace, and justice 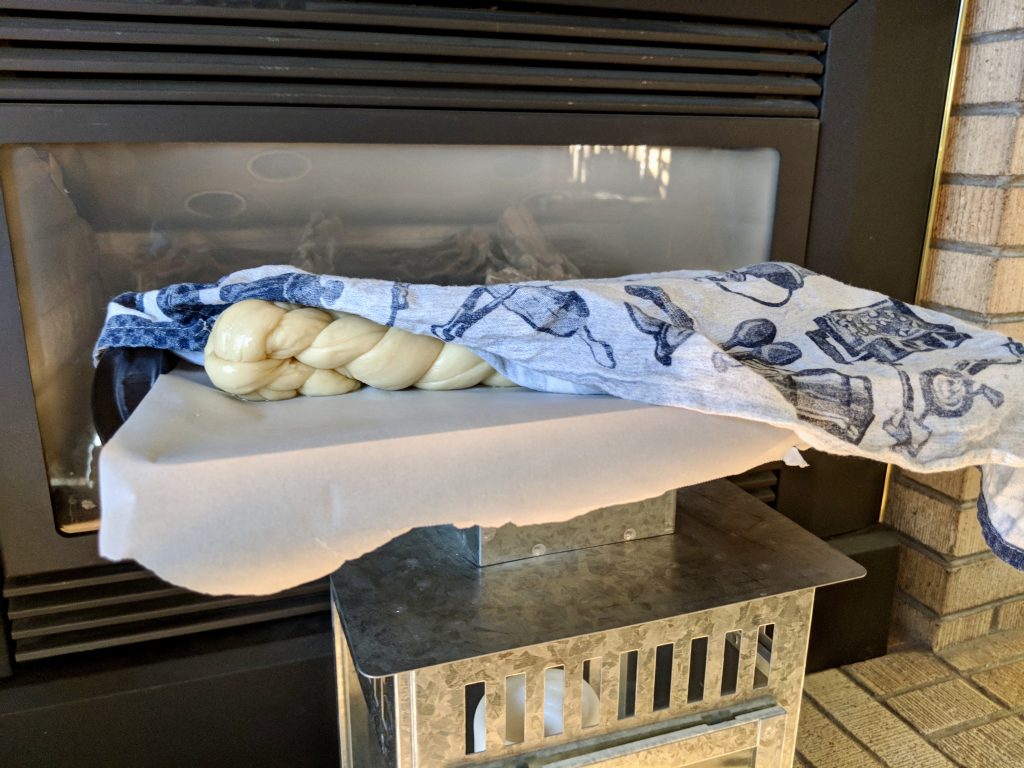 The warmth of our fireplace results in (val) Hallah Rising

Braided Halla like ours symbolizes love, as each strand resembles an arm cozily wrapped around another cloudlike piece of bread. Three braids (which is is what we made and, disclaimer, braiding your hair on the back of your head turns out to be much easier than braiding bread on a cutting board in front of you) symbolizes truth, peace, and justice. The Hallah proved easy and fun to make, with a slightly sweet flavor and wonderfully chewy texture. I will have to admit, even though I try my best to stay away from bread, I have made Hallah three times since my initial baking of this great recipe(!).

Next up in preparation was the Beet Salad with Sour Cream. Cold, pickled dishes are key to Jewish Saturday fare, as Shabbat tradition dictates that from sunset Friday through the sunset of Saturday no work shall occur, including specific types and ways of cooking. Pickling is prevalent worldwide as it is an effective form of food preservation, which was especially key to households trying to make ends meet. Chilling and pickling also ease the food preparation process when lives were busy with errands, housekeeping, farming, and observing religious practices.

Our beets were quickly prepared and pickled by chilling with vinegar. The beets were a surprisingly good dish despite their simplicity (this, we will find, will be a theme for all of the upcoming recipes) – the acidity of the vinegar and sweetness of the beets balanced in a wonderful way, with the fat from the sour cream adding a level of heartiness to this side salad. 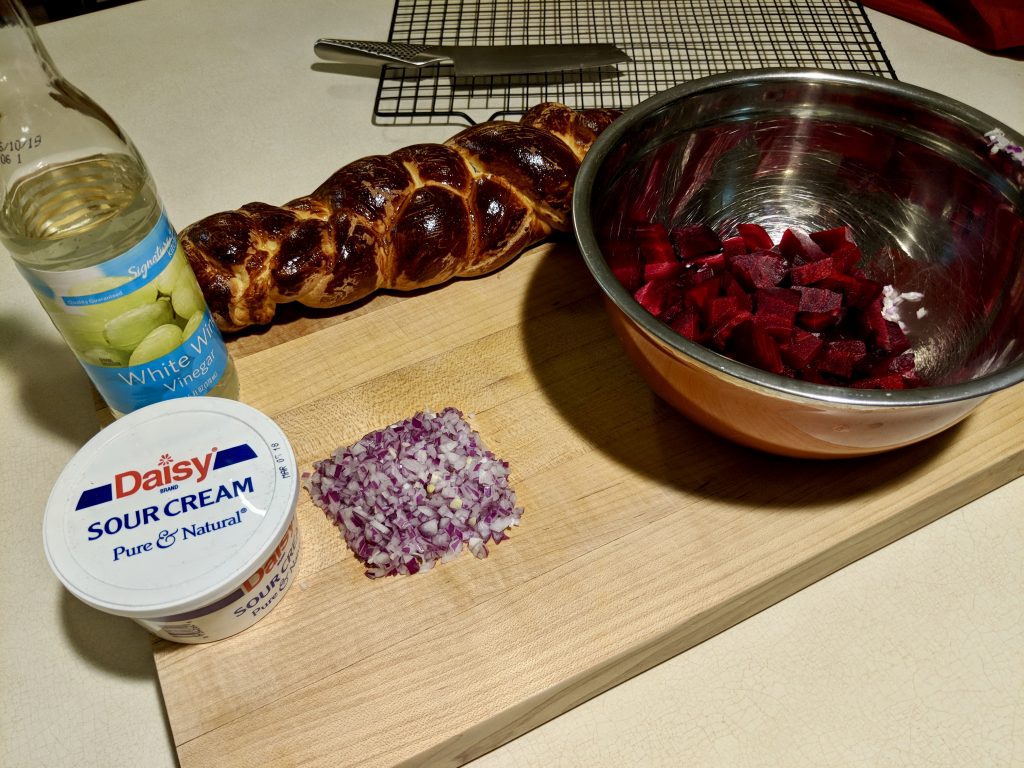 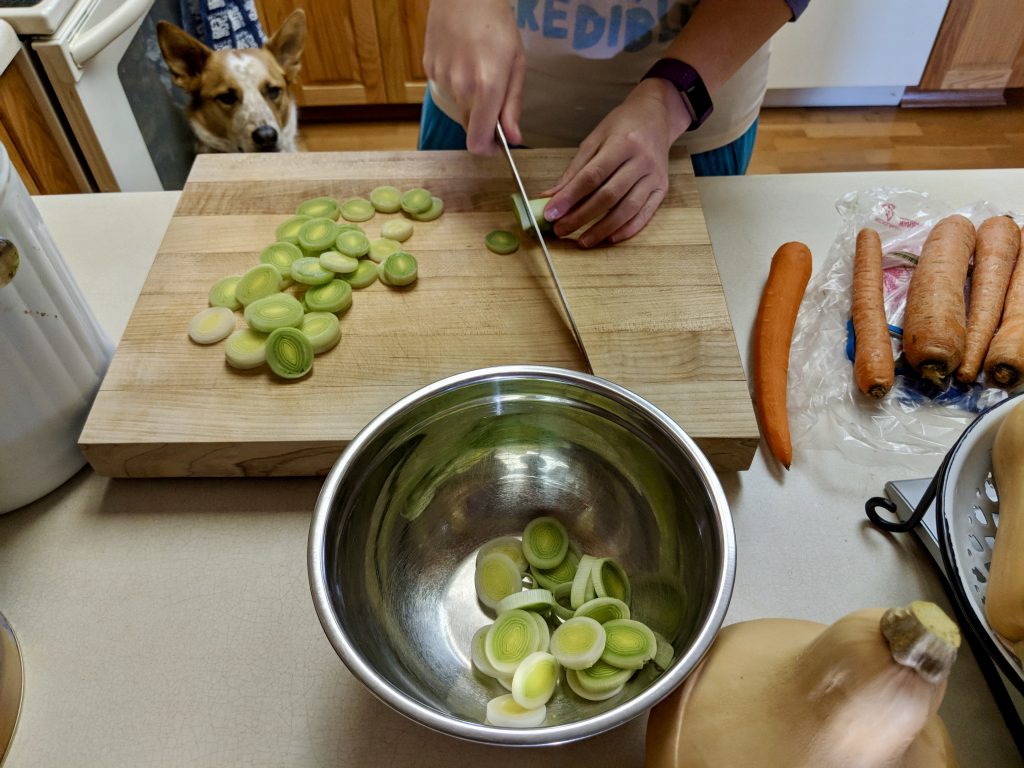 The main course consisted of Poule-au-Bouillon, which is boiled chicken with root vegetables. Poultry dishes are fairly common in most cultures, as they are easy to farm in small areas, often times sharing living quarters with the families raising them. Farming geese and poultry was a common Jewish occupation in Eastern Europe, with records dating back to the fifteenth century. Despite how common this practice was, chicken was once considered a luxury and while it feels like Gary and I eat whole flocks of chickens at a time, eating a whole chicken or a quartered chicken is still a bit of a treat for us. 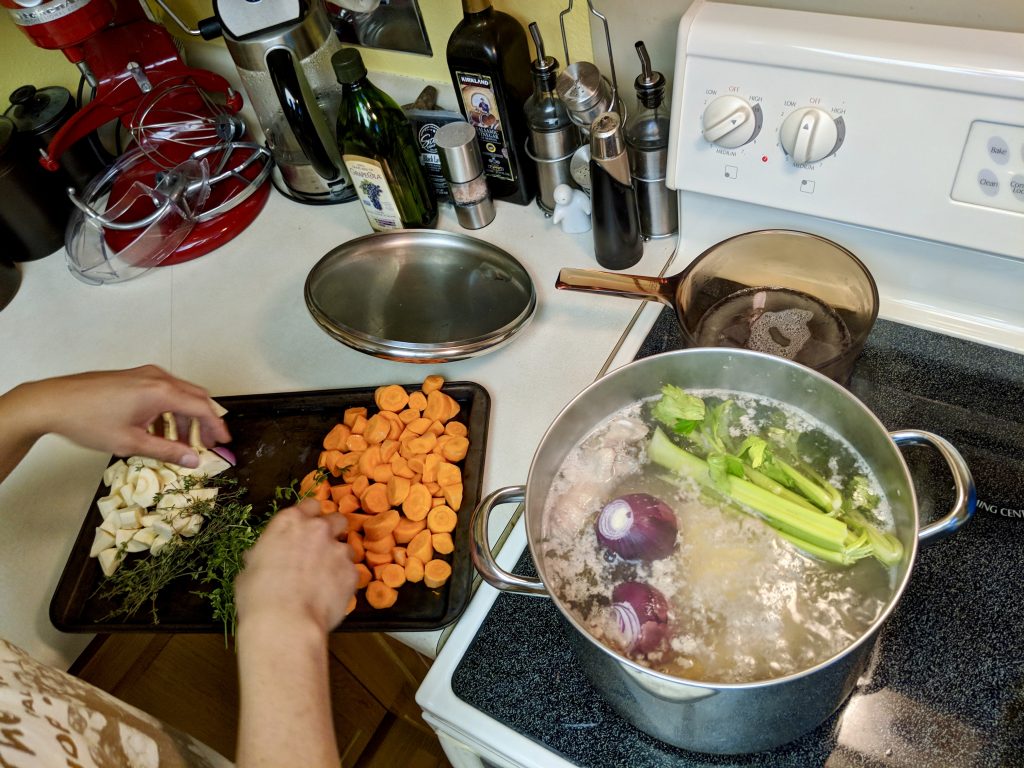 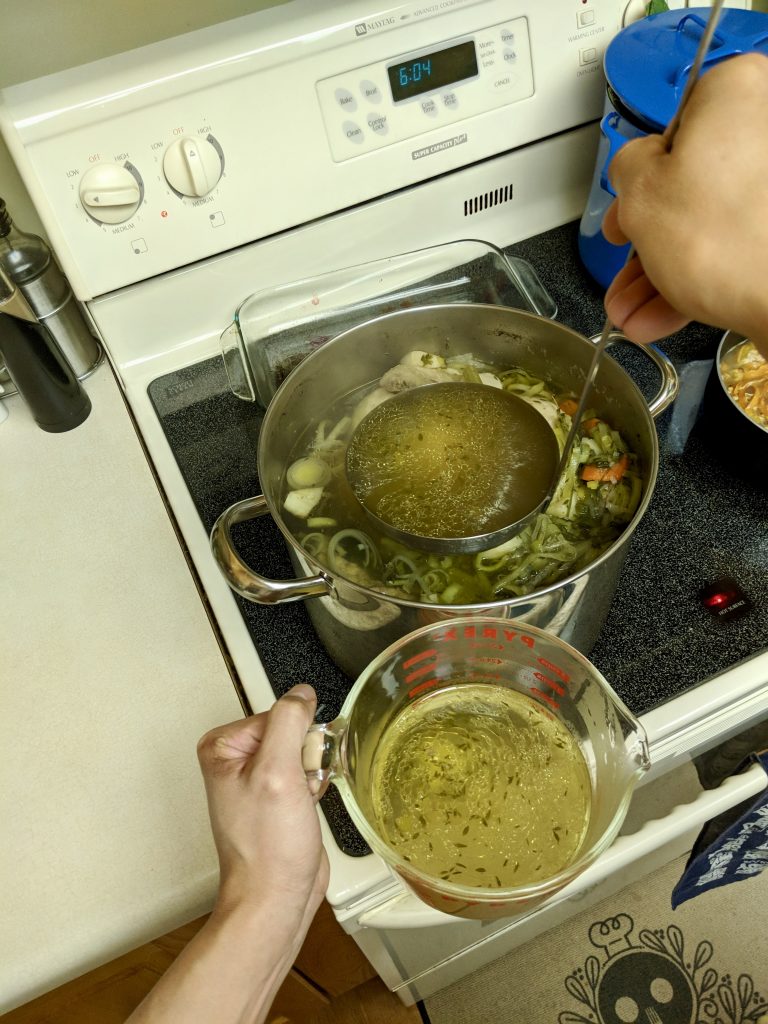 The majority of the stock gets strained off for our next meal (i.e. our next blog post!)

I did hesitate when I saw that this one-pot-meal would be our first dish – I am not a fan of boiled meat, mostly due to the fact that this recipe is not a soup and usually boiled meat stays in soup, because it has been boiled to death (and beyond). But fear not, fellow curious cooks – this one-pot-meal was excellent! Carrots, turnips, and leeks lent a bright flavor to the richness of a whole chicken simmered with garlic and parsley. 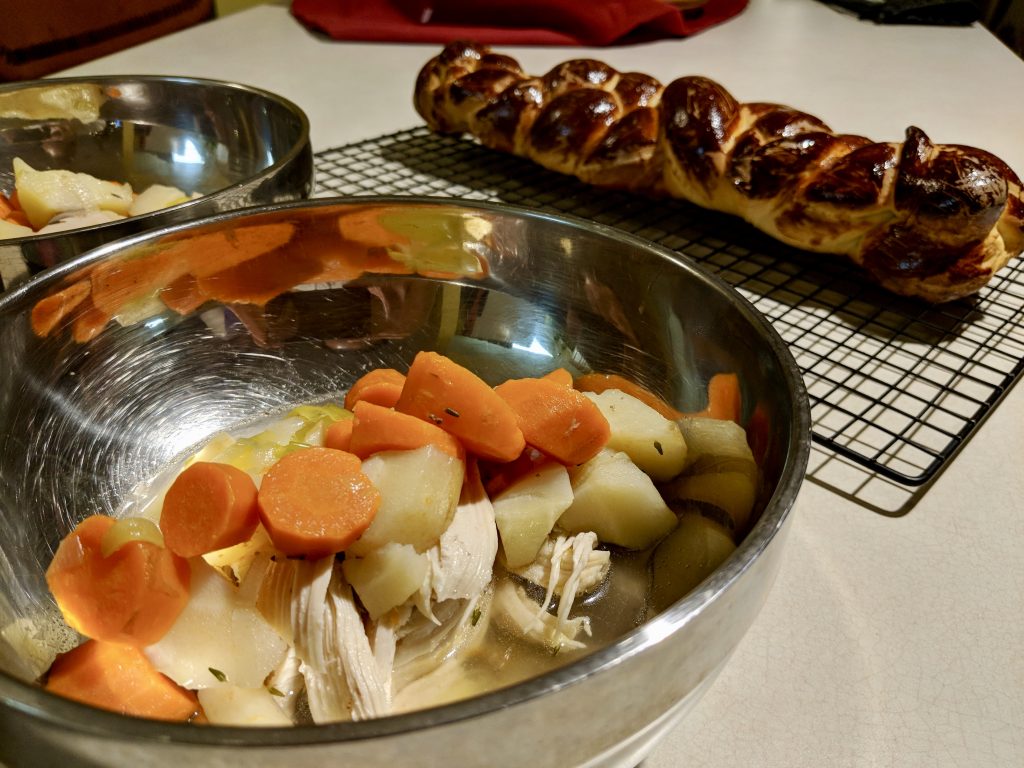 Simple but scrumptious – the story of a one-pot-meal! 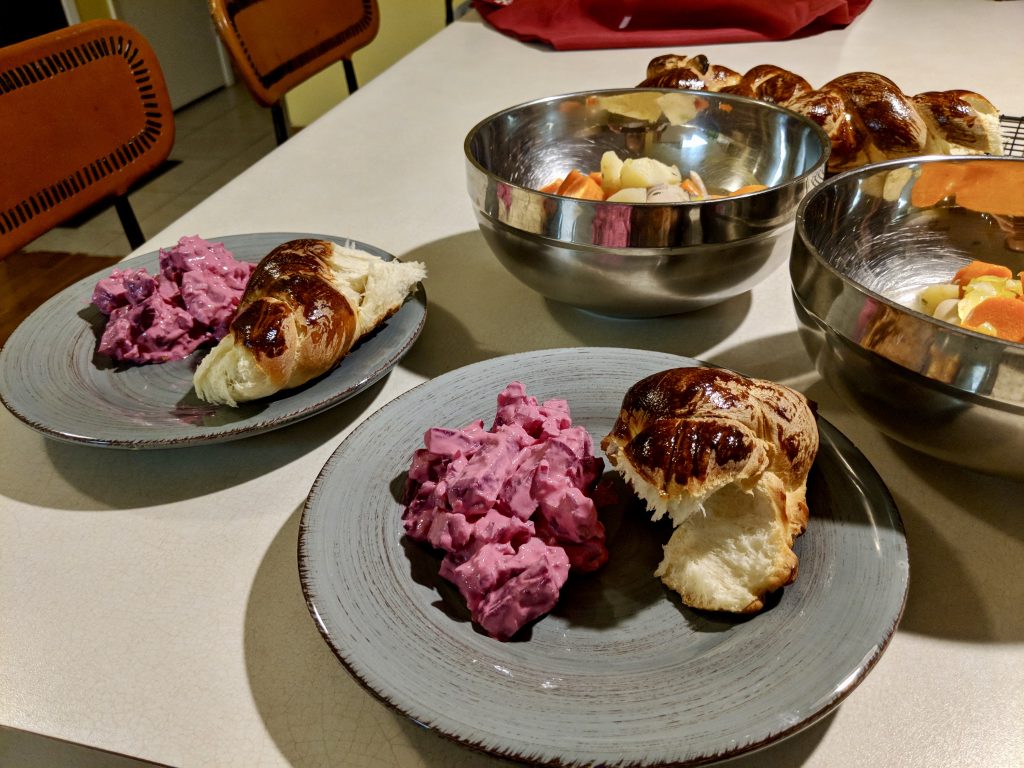 We took roughly 200 photos of chopping carrots, but only one very bad photo of the completed meal: Poule-au-Bouillon with Hallah and Beet Salad

Rounding off this heavier than usual meal for us was the lightness and brightness of Lemon Sorbet (or what was called Lemon Water Ice in the cookbook). Claudia Roden points out that serving water ices at weddings, bar mitzvahs, and other celebrations is an ancient tradition, listing this as the first dessert in the Ashkenazi portion of the book. I cannot say we were incredibly impressed when we mixed water with some lemon and an egg white and placed this sloshy mixture ever-so-carefully in the freezer (which turned out to be not so carefully placed, because one month later I am still finding lemon sorbet on bags of peas). But man-oh-man, was this deceptively simple dish an unbelievable tasty and great way to end our meal. 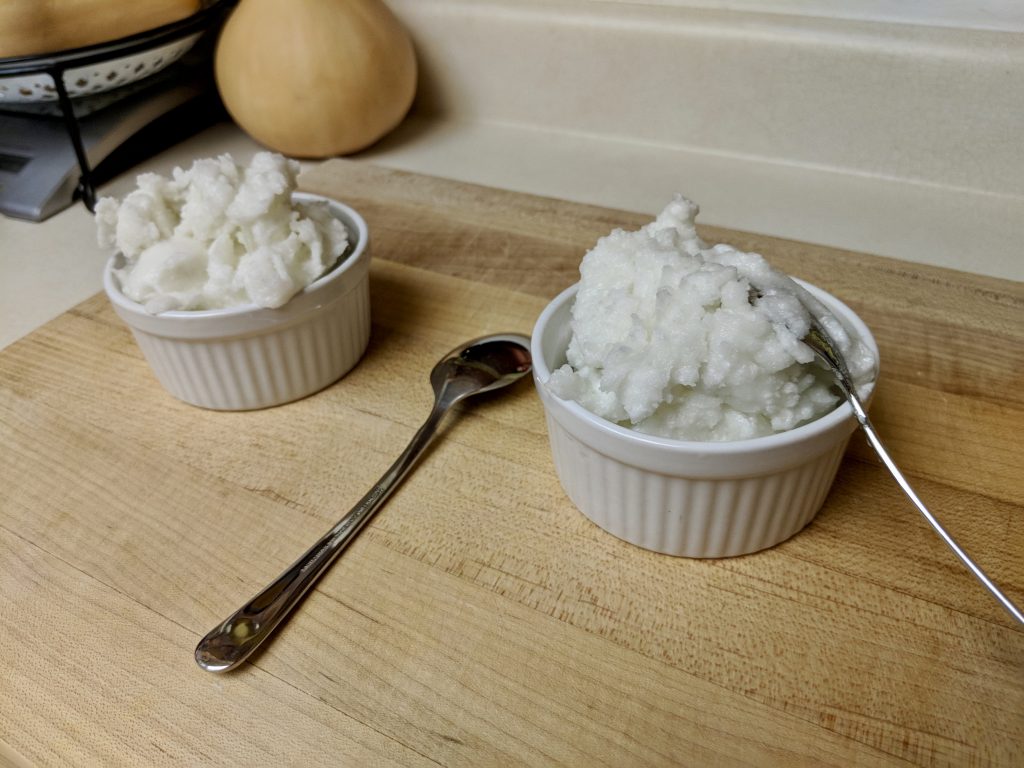 The perfect ending to our first meal: a bright and crisp sorbet with a wonderful velvety texture

And In The End, The Food You Make Is Equal To The Care You Take…

So how did our first meal fare? As a reminder, our rating system is based on sticks of butter (because butter is best!), with 1 being the absolute worst and 5 being out of this world. Sticks of butter are assigned to Difficulty (how many kitchen fights were needed to complete the meal?), Tasty Goodness (was it a palate poor or did it make our mouths merry?), and Repeat Customer (how likely are we to return to the recipe?).

Every aspect of this meal was deceptively easy – which is why we were so skeptical of how good it would taste. How could something that did not elicit tears of frustration or severed fingers turn out so deliciously?

[] [] [] 3/5 Poule-au-Bouillion: surprisingly tasty and light – very different from what we expected!

[] [] [] 3/5 Poule-au-Bouillion: While tasty, it was not very memorable and was almost too light for a winter meal.

[] [] [] [] 4/5 Lemon Water Ice/Sorbet: We could see why this would make a great traditional dessert for celebrations – next time we will find a better way to freeze without accidentally pouring the contents into the bottom of the fridge…

All in all, this was a great meal to start off Made In Marrow. We hope you have enjoyed and we are excited about our upcoming Sunday meal!

Bon appetit to all you curious cooks,