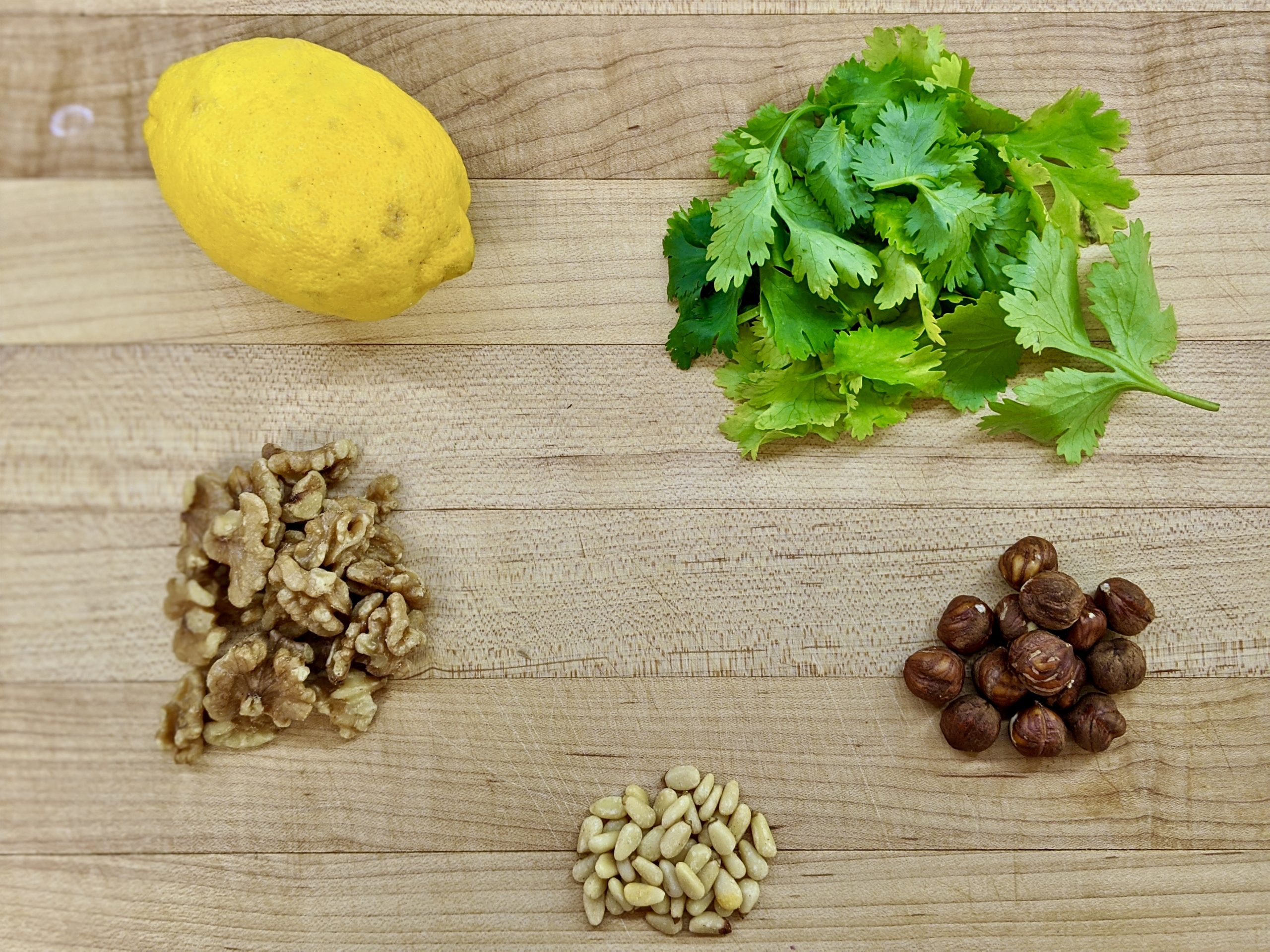 Tonight’s meal was comprised of quite a few dishes with Spanish and Italian roots, two fish main courses, but the thing they had most in common was that 4/5 recipes used nuts. For this week’s dinner, we had to ensure that we were stocked up in walnuts, hazelnuts, almonds, and pine nuts (and a lot of pine nuts at that!). While the variety of nuts was a bit surprising, the fact that many of our recipes contained them shouldn’t be – approximately 40% of adults in North America consume some type of nut every day. In fact, the amount of calories in an average adult’s diet from nuts has increased by 25% since 2000, growing more than any other food group in our daily diet. With regards to specific nuts, almonds have seen the biggest jump, but peanuts continue to be the most consumed legume in American households.

While this last fact is definitely not the case in our house (Gary has a deadly allergy to peanuts), we do consume our fair share of nuts. And tonight’s recipes certainly did not disappoint – from the common (almonds and walnuts) to the pricey (hazelnuts and pine nuts, we are talking to you!), we enjoyed a variety of dishes which were subtly augmented by the humble nut. So get out your nutcrackers and follow along in tonight’s nutty meal!

This Syrian side salad holds its roots in the Jewish bazaars and hosts a variety of nuts and spices, making it a bit different than your traditional tabbouleh. Not unlike last week’s tabbouleh though, it was fairly simple – combine bulgar with pomegranate juice, lemon juice, tomato paste, cumin, coriander, allspice, cayenne, chopped walnuts, chopped hazelnuts, toasted pine nuts, parsley, and olive oil – and chill for four hours.

While Gary and I both enjoy last week’s tabbouleh more, this week’s bulgar salad was not too shabby. Bright and complex from the pomegranate, lemon juice, and tomato paste, as well as rich and savory from the nuts and oil, this is a more complex version of simple tabbouleh. But, sometimes less is more, which is why Gary and I probably enjoyed last week’s version more.

Both of this week’s recipes call for red mullet, a fish that Gary and I had never seen before. Red mullets are a species of goatfish which are delicacies in the Mediterranean, especially valued by the ancient Romans. While the Romans paid a pretty penny for red mullet, we could pay no pennies for any, as (surprisingly) there was no mullet to be found in Santa Fe. We chose to substitute tilapia, which given our past history, we were hoping would be an adequate substitute for this ancient form of goatfish.

Roden’s Sicilian recipe was fairly straight forward – season the fish with salt and place in a baking dish. Cover fish with a sauce created by mixing beating olive oil with white wine vinegar, salt, pepper, and sugar. Sprinkle pine nuts over all and bake at 375 degrees for 20 minutes until cooked.

The fish was rich and savory, with just a hint of brightness from the vinegar. While extremely simple, the fish was excellent, almost buttery with a nice crunch from the toasted pine nuts.

Our second goatfish recipe of the night takes us from Sicily up through northern Italy to Tuscany. In addition to the red mullet, it also features tomatoes, which had been introduced to Italy following their introduction to Spain, allowing Jewish communities to enjoy this “New World” fruit. Marranos of Spain and Portugal (Jews from Iberia who were fleeing the area due to the Inquisition) traded with Marranos who had emigrated to South America during Columbus’ exploration of the continent. It is hard to picture Italian food now without the existence of tomatoes, which is probably why this recipe is a classic dish featuring both the Roman’s favorite fish and the exciting new fruit immigrant.

This recipe began with making the sauce by frying garlic in olive oil until just colored. Tomatoes (from our summer garden) were then added, along with salt and pepper, and sugar. This sauce simmered while the fish was added to the pan and cooked all together for 10 minutes.

While the above baked fish was our favorite main course of the night, this tilapia substitute for red mullet was also quite tasty. Tomato-y and garlicky, this saucy dish was tender and savory. The mild tilapia stood up well to the sauce and actually could have done with a few more of our New World tomatoes for a bit more sauce to sop up and enjoy!

From Tuscany we travel a bit further north to Venice, Italy. According to Claudia Roden, this Venetian dish can also be found in Spain and is the second dish of the night to feature pine nuts. To start the dish, onion was fried until soft, after which pine nuts and chopped dates were added and briefly simmered. Spinach was piled into the pan and then covered, steaming until soft.

Gary and I both agreed that this dish tasted like Christmas – perhaps a combination of the spicy spinach and sweet dates. The contrast between the soft leaves and the crunchy pine nuts was also enjoyable, making this a nicely elevated version of steamed spinach.

For our last bite of the night, we travel north yet again, to enjoy some dessert from Spain. Featuring a fruit iconic of Seville, this dessert is very heavy on the orange flavor, so citrus haters, beware!

The cake was made by folding beaten egg whites into a mixture of egg yolks, sugar, orange zest, cinnamon, ground almonds, and blanched almonds. This was gently spooned into a springform cake pan and baked at 350 for 45 minutes until browned and set. As this baked, the sauce was made by boiling orange juice with sugar and simmer until thickened. Once the cake was done a cooled, the syrup was poured over the top and allowed to rest for three hours.

True to its name, this cake was very, very orangey. Not in a bad way, but if you are not fond of oranges or citrusy flavors, this cake probably is not for you. The cake itself was moist, with a light almond flavor, and was yet another miracle in elevation baking as it did not collapse after coming out of the oven. It was a bit sweet, so only a small piece was needed – if you are a lover of all things yours, this cake is for you!

So how was Made In Marrow’s meal number 69? As a reminder, our rating system is based on sticks of butter (because butter is best!), with 1 being the absolute worst and 5 being out of this world. Sticks of butter are assigned to Difficulty (how many kitchen fights were needed to complete the meal?), Tasty Goodness (was it a palate poor or did it make our mouths merry?), and Repeat Customer (how likely are we to return to the recipe?).

This week’s dinner was fast to make and quick to prep, so fast that we were eating within thirty minutes (the cake obviously took longer, but was still pretty easy nonetheless).

[][] 2/5 Gâteau au Sirop d’Orange – Almond Cake in Orange Syrup – Not bad, but also not our favorite, so probably not again

All of tonight’s dishes fared fairly well and also managed to burn through our nut stores, so these chipmunks will need to restock for next week’s Sunday dinner!