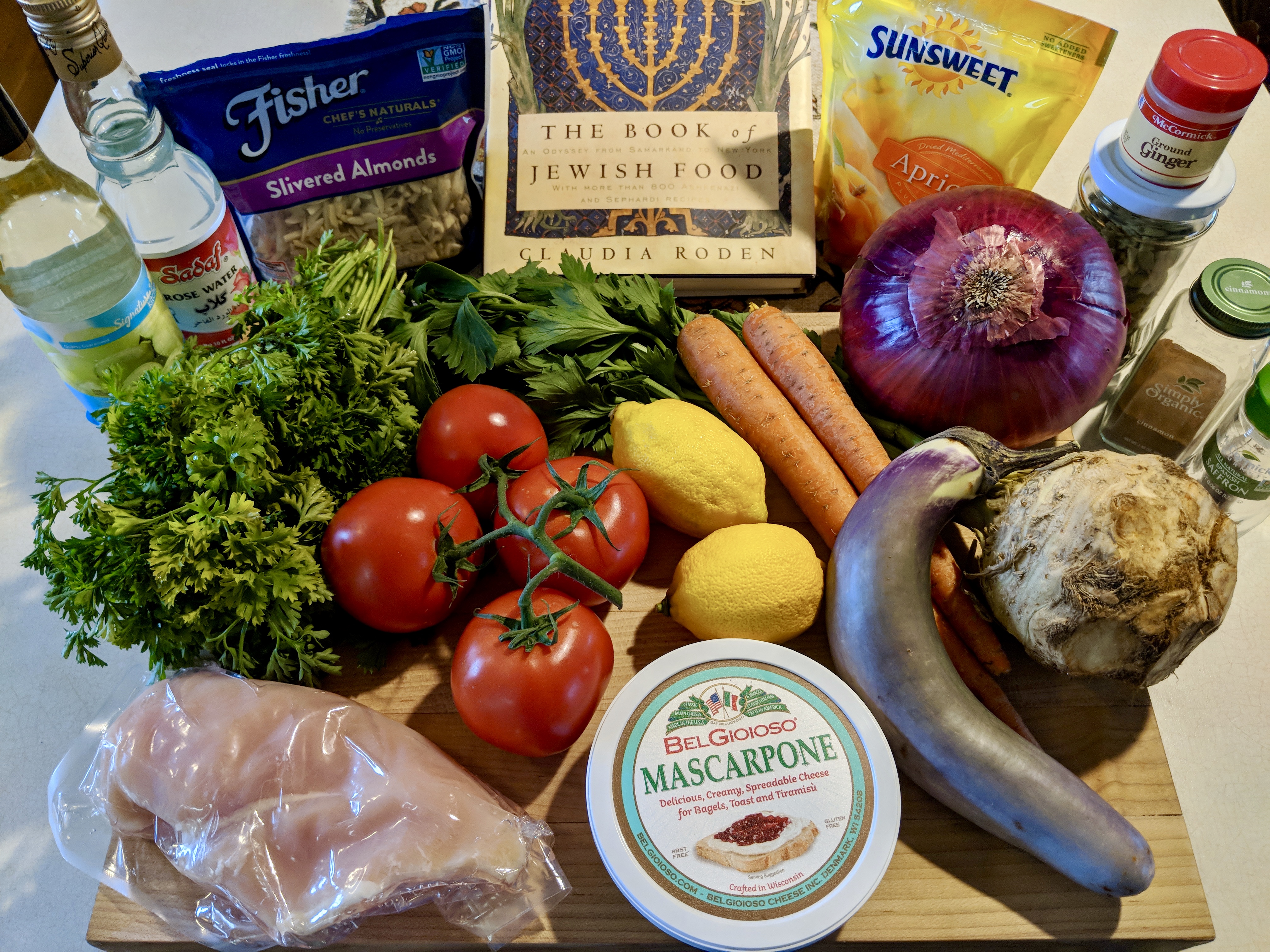 Apiu Ilado – Celeriac and Carrots in a Lemon Sauce

We have just spent the last week in Vancouver, wining and dining with friends and family. It was a great trip and every moment was spent with people we love, including having the opportunity to celebrate a friend’s wedding in the picturesque Stanley Park. 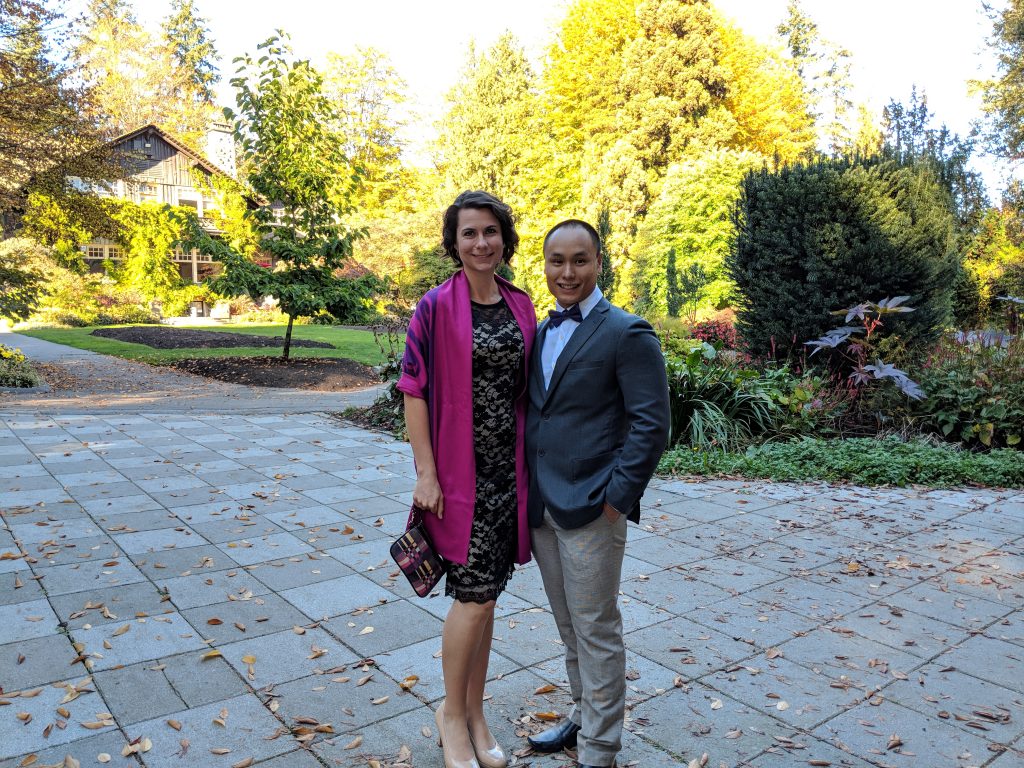 We clean up pretty nice when we are not making a mess in the kitchen!

Additionally, we had the opportunity to put our Made In Marrow podcast plans in motion. We are pretty excited about this newest addition to our food blog. So no exposition this week, lovely foodies, just some post-vacation recovery and yet another great meal from The Book of Jewish Food. Read on and enjoy!

Apiu Ilado – Celeriac and Carrots in a Lemon Sauce 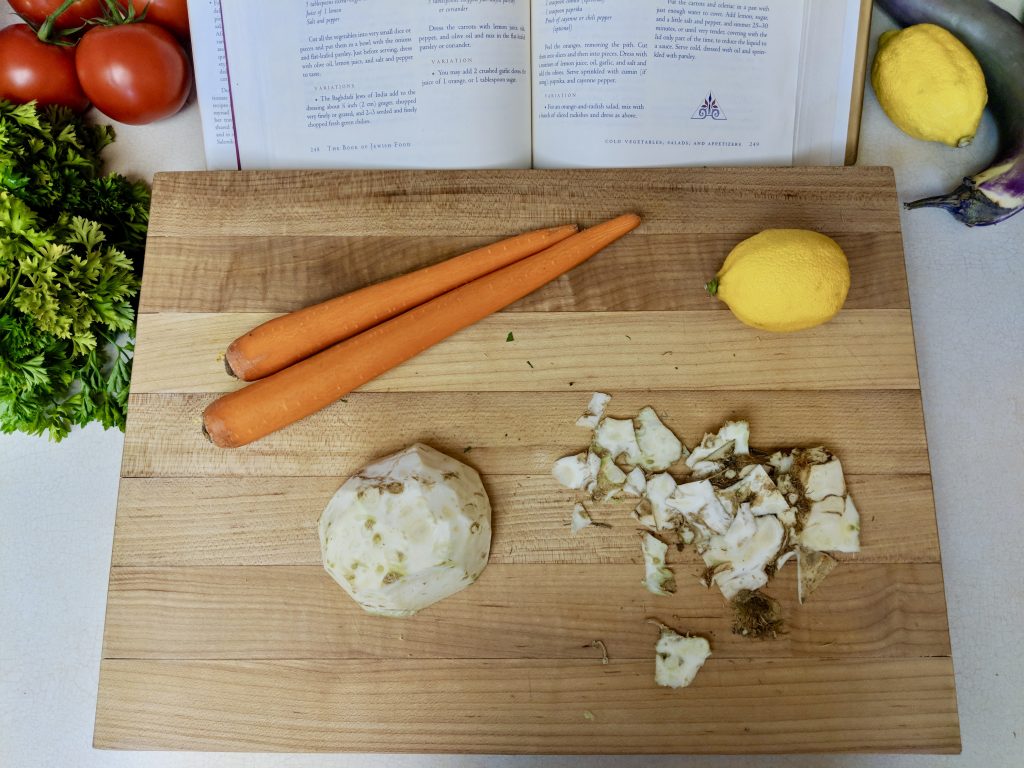 The roots of our root salad

This salad has roots in Turkey and the Balkans and is a traditional Judeo-Spanish dish. The main components are carrots and celery, making this a root heavy salad. While celeriac and celery are members of the same veggie family, celeriac (also known as celery root) is actually not the root of the celery and is an entirely different root vegetable in itself. Celeriac does have a very strong celery fragrance though, so it is easy to understand why it is often thought to be the beginnings of celery stalks. 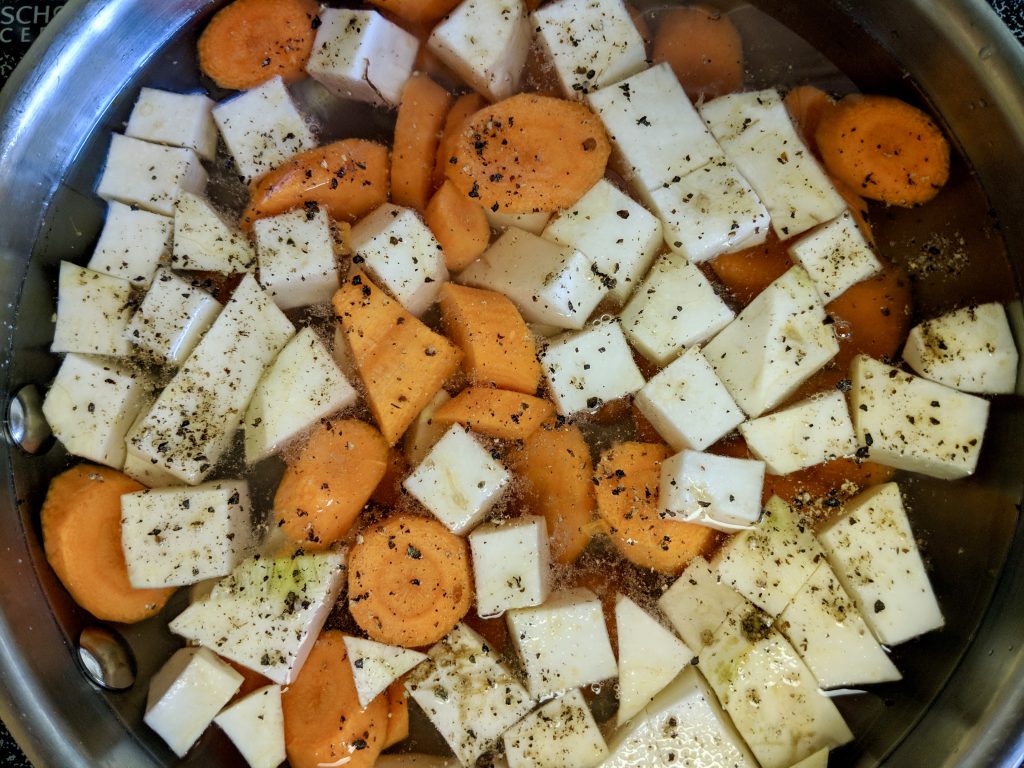 For this salad, peeled and cubed celeriac was boiled with sliced carrots in water along with lemon juice, a little sugar, and salt and pepper. This was simmered for 40 minutes until the water reduced to a sauce and then chilled in the fridge. Just prior to serving, the salad was dressed with a small amount of oil and given a quick toss. Unfortunately, this salad was just not a hit – it was a bit too bitter (perhaps the celeriac was old – it proved to be difficult to find in Santa Fe) and perhaps could have benefited from more sugar to balance out the taste. Not ones to waste food, we do plan to roast the remainder of the “salad” for a dinner-time side dish later this week… 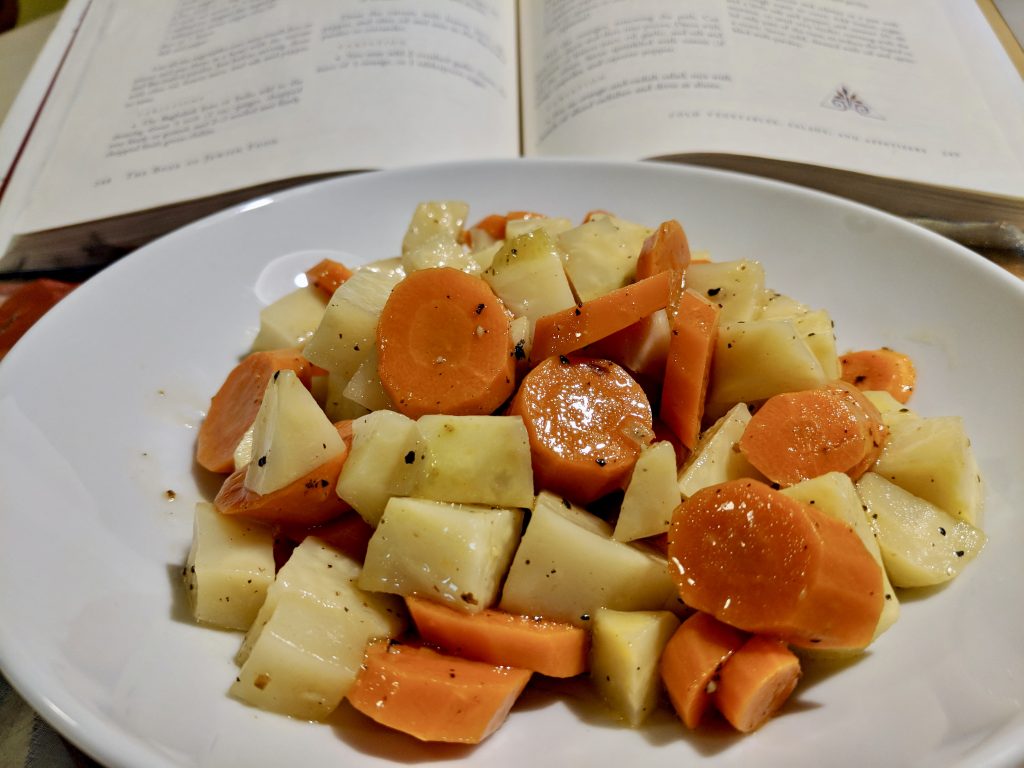 Unfortunately not as tasty as it looks…

Yet another pastry in our exploration of savory pies, Borekas de Handrajo are a specialty of Izmir, a city on Turkey’s Aegean coast. The filling resembles ratatouille and like the above salad, is another Judeo-Spanish dish classic to Turkey. The pie dough is now one we have made several times, so we are starting to feel pretty confident in our pie dough game! 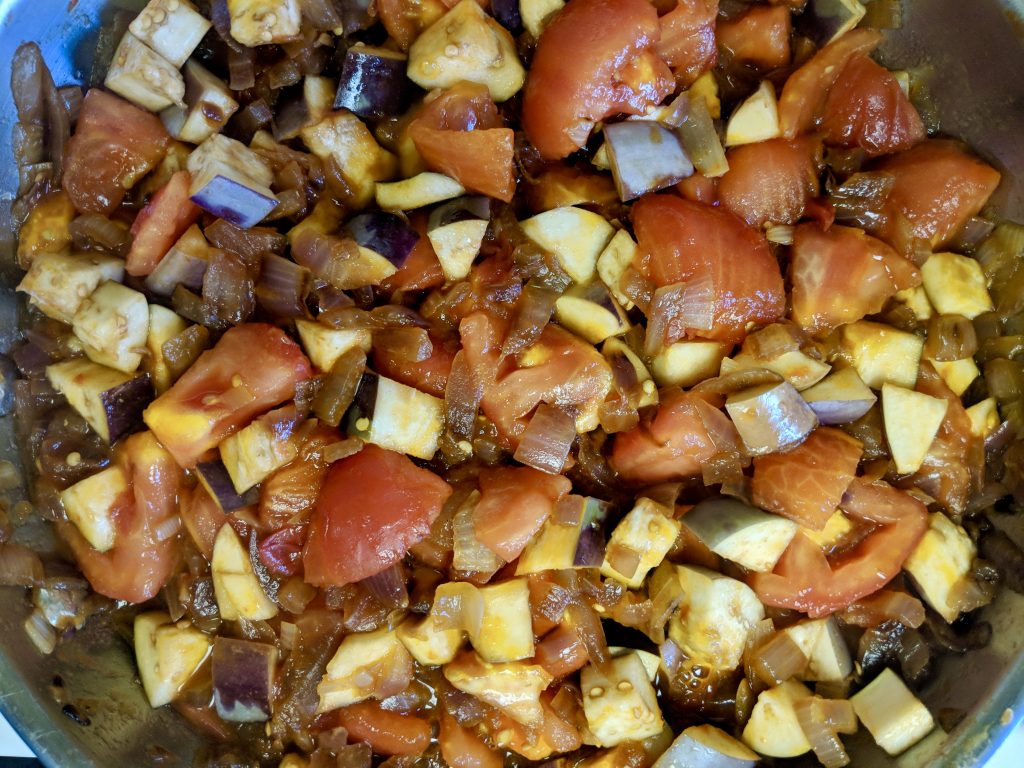 The innards of our eggplant and tomato pie

For the filling, chopped onion was fried until golden after which cubed eggplant (from our garden) was added and sautéed until soft. We turned the heat up and four peeled and cubed tomatoes were added and cooked until reduced and jammy. While this mixture was cooking, the pie dough was made by mixing equal parts oil and water and adding just enough flour until a soft dough was formed. 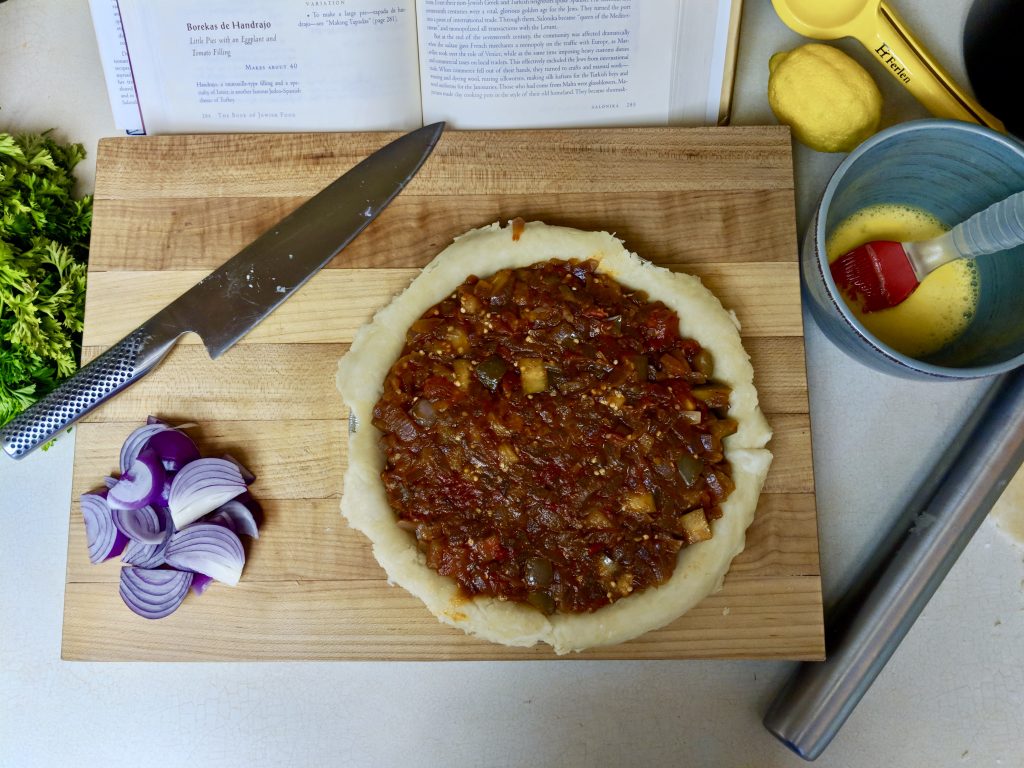 Almost ready for the oven!

The dough was rolled out and placed in out trusty pie pan. This was filled with our eggplant and tomato concoction and covered with the remaining rolled out dough. Topped with an egg wash and crimped closed, the pie cooked at 325 degrees for 40 minutes until golden. 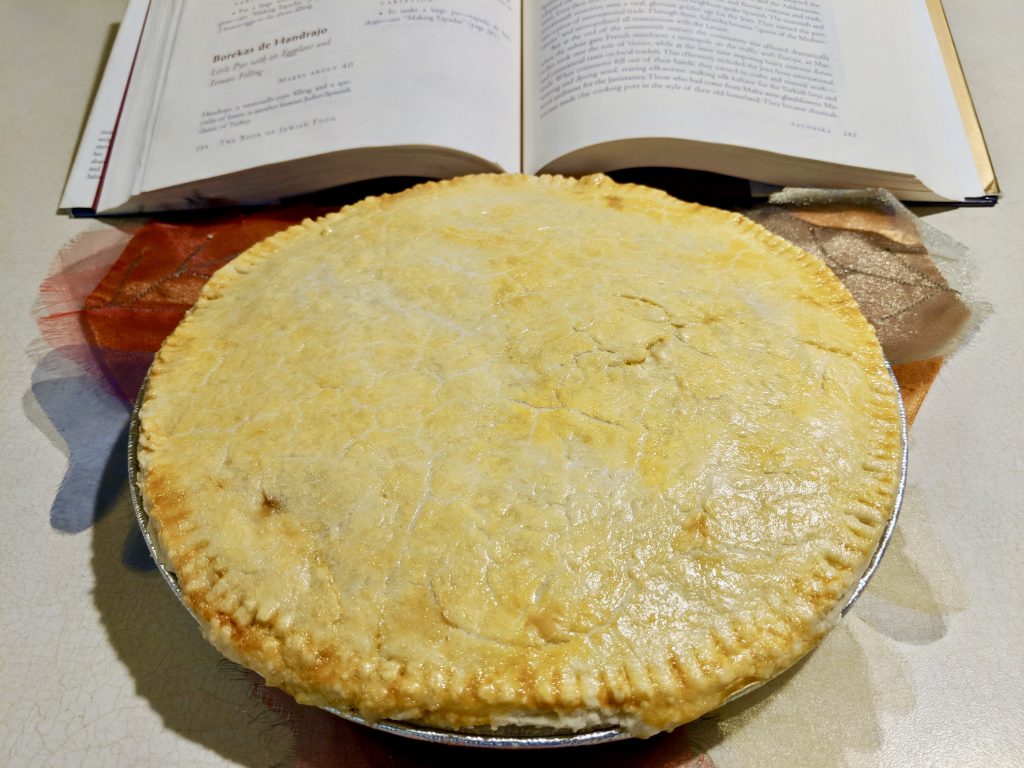 The pie was excellent – smooth from the eggplant and wonderfully savory. The tomatoes added a bit of brightness and much-needed acid to the dish, perfectly balancing out the salty crust and earthier eggplant. This was another great pie that made for some tasty leftovers over the following week! 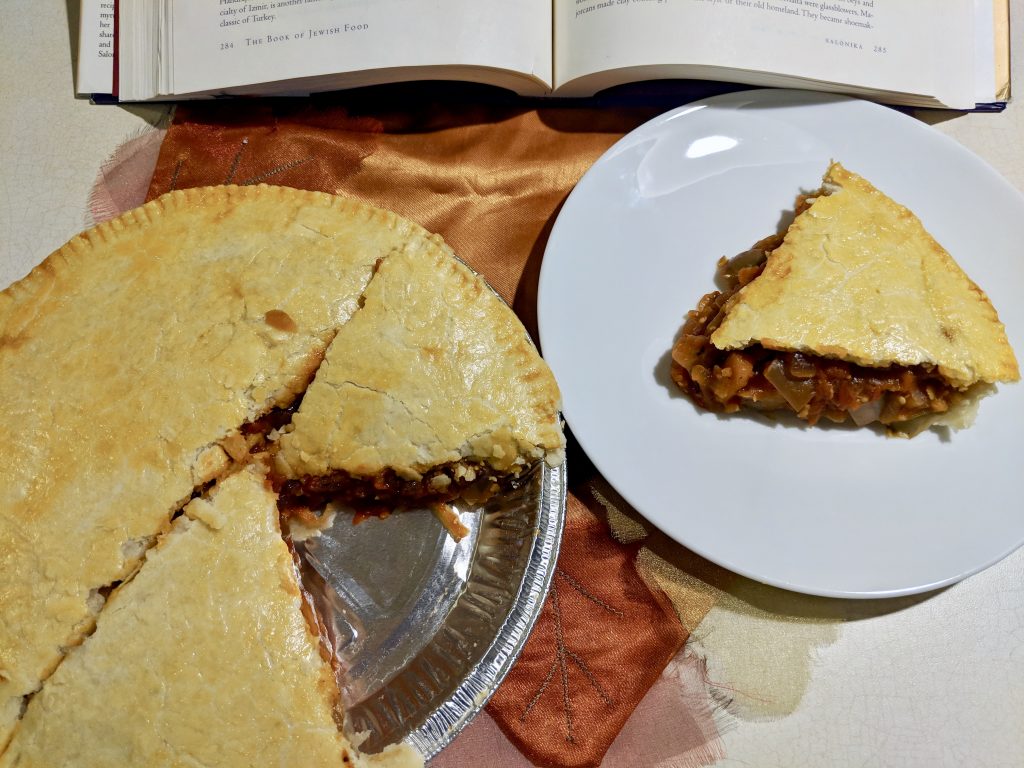 This dish has its roots in thirteenth century Syria and has similar counterparts in Morocco and Egypt. Claudia Roden decided to take all three country’s recipes and combine them into one savory pasta dish, which we greatly enjoyed. 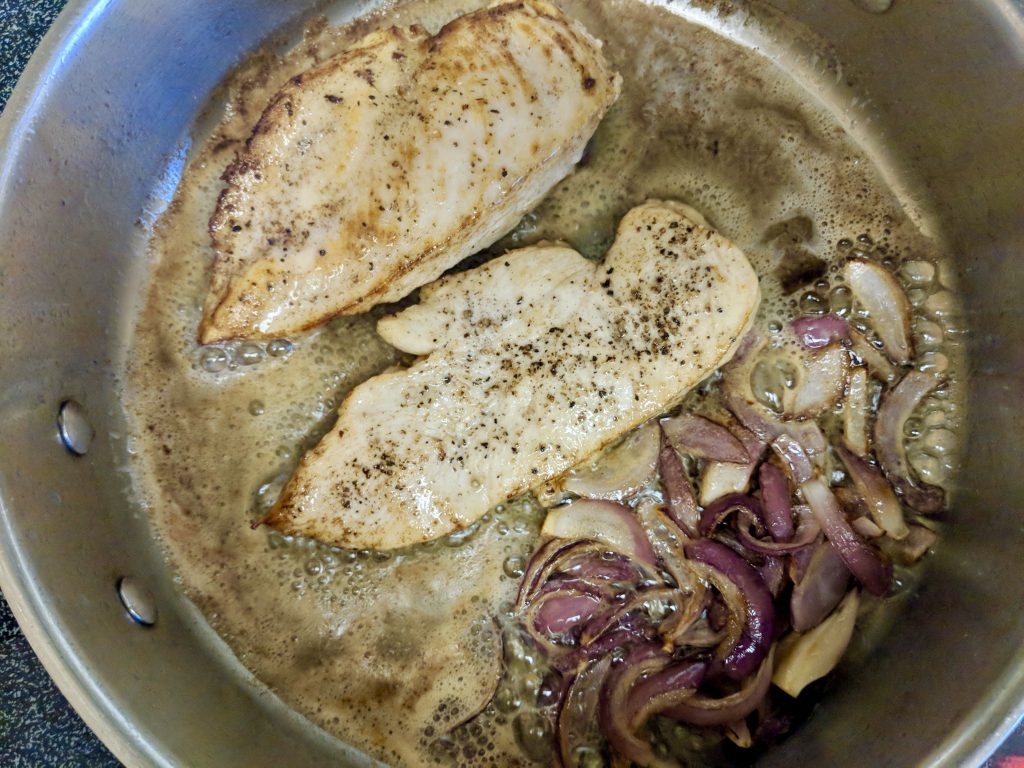 We sliced one chicken breast in half and seared these with oil, cardamom seeds, lemon juice, ginger, and cinnamon. Once browned, the chicken was covered with water and simmered for 45 minutes until cooked through and a sauce had formed. Saffron was added along with spaghettini which was cooked until tender. 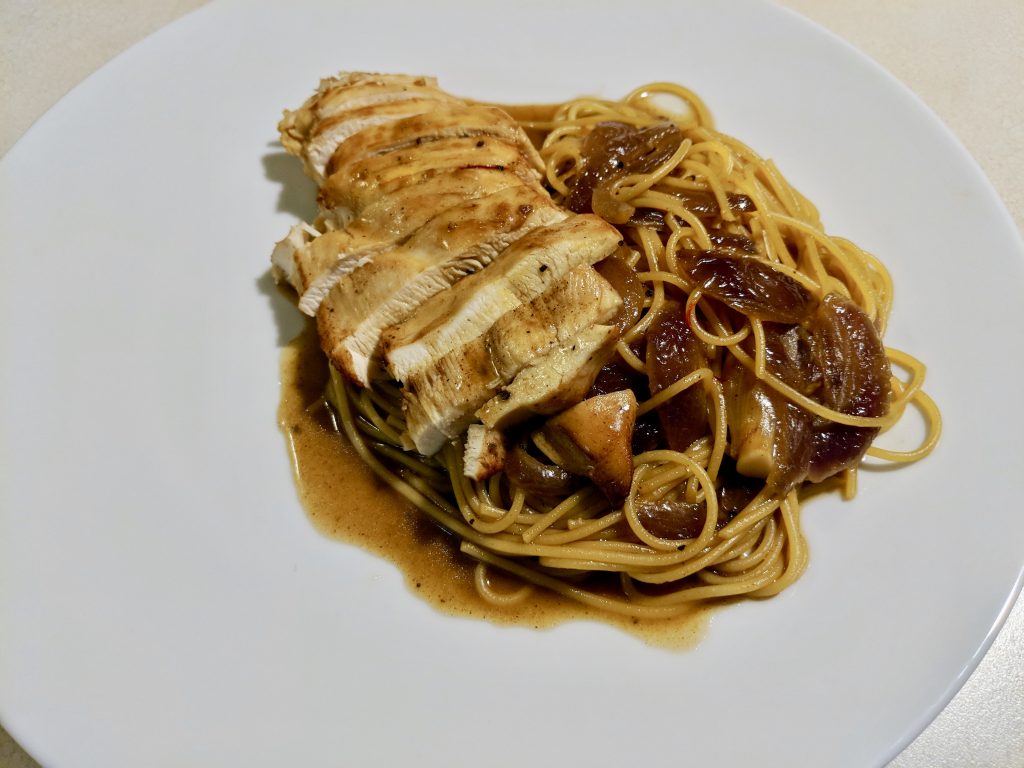 The mixture smelled wonderful and the flavor did not disappoint once it hit the plate. We were not sure what to expect of a Middle Eastern pasta dish, but this was excellent – all of the spices melded well to create an almost chicken stock sauce. The chicken was moist and flavorful and the sauce was perfectly suited to the spaghettini. This is definitely a dish we would make again! 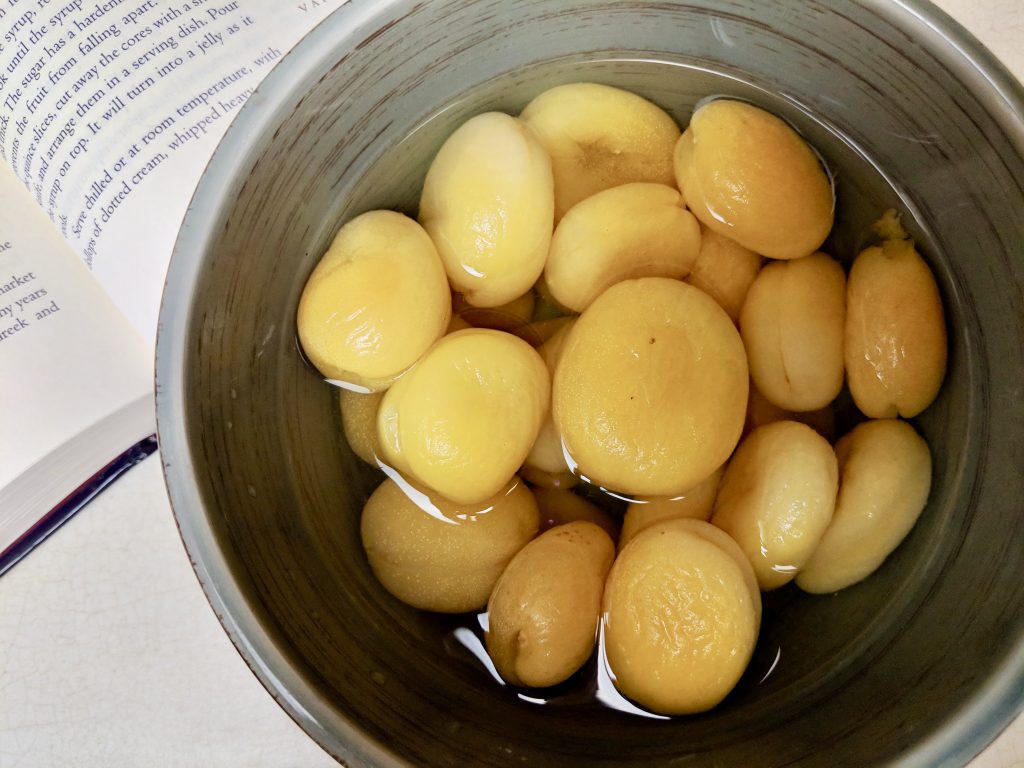 This Lebanese pudding is meant to be made with fruit leather, but Roden says that it is acceptable to substitute dried apricots, which is what we did. Our apricot cream was probably the most straightforward dish we have made so far – we soaked the apricots overnight, then blended these with a bit of their soaking juices along with orange-blossom water, lemon juice, and sugar until smooth and creamy. Topped with slivered almonds and a bit of mascarpone, the pudding was not too sweet, a little savory, and very bright from the blossom water and lemon juice. We were not too sure what to expect, but this dessert came through and hit the spot! 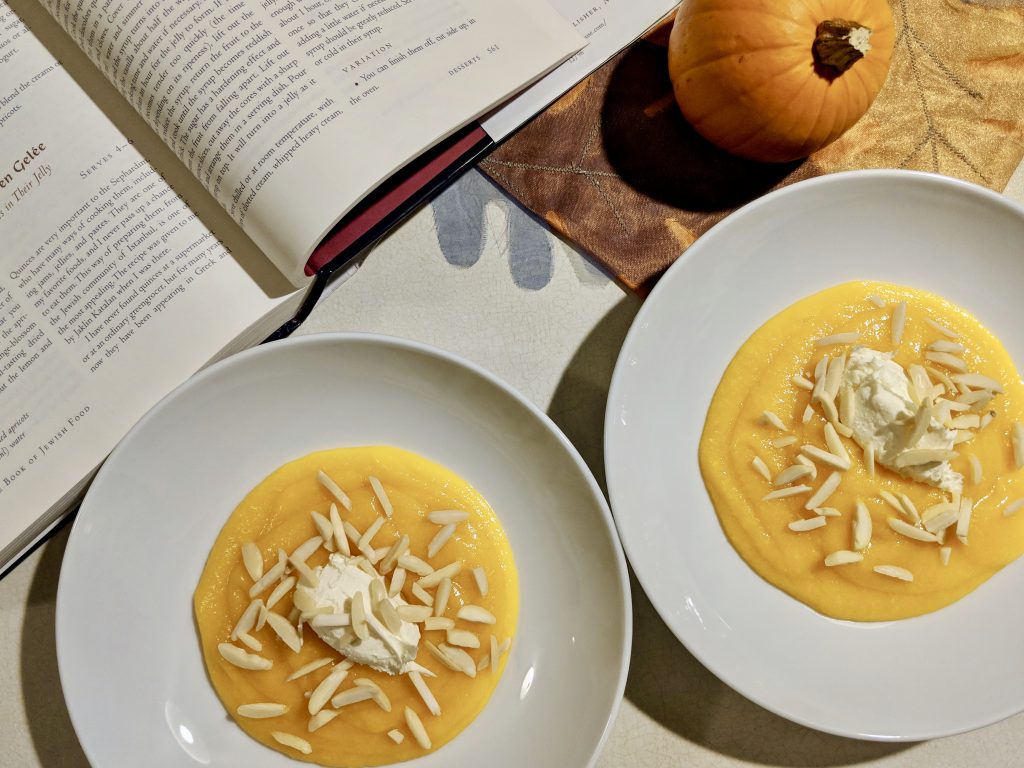 All about the apricots!

So how was Made In Marrow’s meal number 34? As a reminder, our rating system is based on sticks of butter (because butter is best!), with 1 being the absolute worst and 5 being out of this world. Sticks of butter are assigned to Difficulty (how many kitchen fights were needed to complete the meal?), Tasty Goodness (was it a palate poor or did it make our mouths merry?), and Repeat Customer (how likely are we to return to the recipe?).

This was a hearty meal with not too much prep or technique – and we’ve got to say (again), we think we have this pie game down!

[][][] 3/5 Crème d’Amardine – Apricot Cream – If we happened to have all of these ingredients in the kitchen again, we would definitely consider making this dessert again

While one dish was a dud, we did enjoy the novelty of pasta in this week’s fare, so that’s a win in our books!