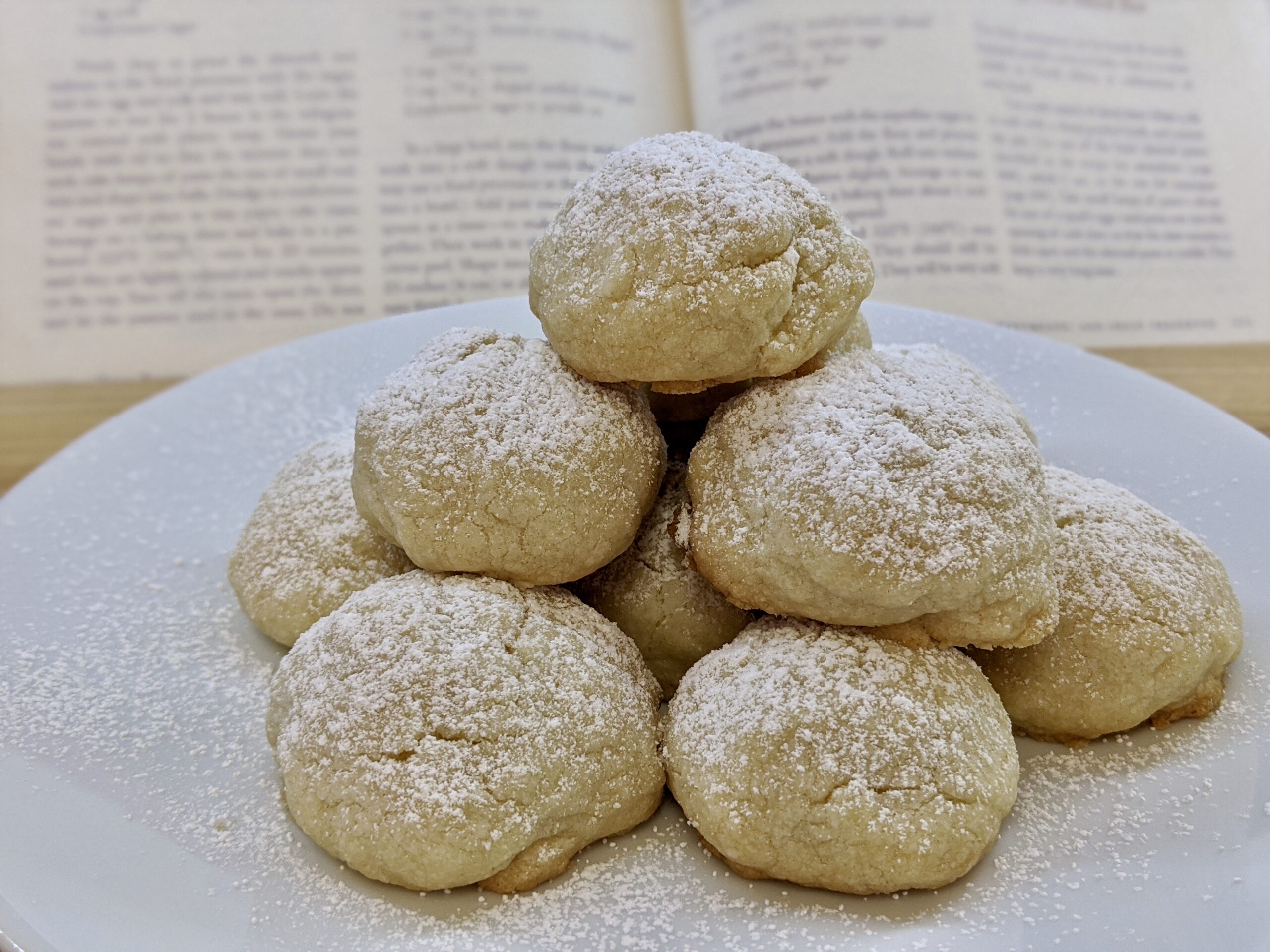 It has been a bit more than a month since our last blog post and, oh, what a month it has been! Despite the fact that our state of New Mexico has delayed its re-opening due to an increase in coronavirus cases, Gary and I have remained quite busy with household projects, having accomplished a BBQ rejuvenation, intensive weed pulling, grass planting, oven/wash/dryer cleaning, and backsplash mounting over the past four weeks (just to name a few things). We also began to reap the bounty from our garden, re-upholster a wingback chair, and go on a mini fishing excursion (my computer was also out of commission for two weeks, so this certainly helped with the non-technological productivity).

But, having crossed a substantial number of items off of our honey-do list and receiving back my trusty MacBook, we are back in the kitchen and at the keyboard. So please excuse our absence and we hope you enjoy tonight’s fishy feast!

According to Claudia Roden, Salonika (the second-largest city in Greece) is famous for this dish, with its signature sauce thought to be Greek and Turkish in origin. However, this recipe has also made appearances in early Iberian communities living in England, Holland, and Denmark, so tracing its actual roots may be a bit challenging. Indeed it is also a favorite amongst Eastern European immigrants and is often served as a meatless Friday dish in Britain, so perhaps the widespread claims of its origins is just related to that the ingredients in the sauce blanche simply make sense when combined.

This simple recipe starts off with putting white fish (we chose flounder) into a saucepan and covering it with water. The pan was salted, peppered, lightly sprinkled with oil and lemon juice, and then slowly brought to a boil to gently poach the fish for 10 minutes.

To make the sauce, some of the fish poaching water was set aside and combined with lemon juice and lightly beaten eggs. This was then poured into the pan with the remaining fish poaching water and stirred constantly over low heat until the sauce thickened. Once it had reached an ideal level of sauciness, the sauce was poured over the poached flounder and garnished with parsley.

This dish was extraordinarily light with the taste of lemon being the main focal point. The fish was tender and flakey and for once, our only available fish on hand proved to be a nice compliment to its airy sauce. This paired nicely with the below rice cake, which was also a greatly needed starchy component tonight’s meal. To be totally transparent, this was supposed to be served cold, but we ate 90% of it hot and saved a small amount to be tasted the next day. Its lemony flavors were heightened after chilling, but we preferred the hot version over the chilled dish.

We leap from the cuisine of the Ottoman Empire to a popular North African dish that utilized our pickled lemons which we had jarred earlier last year. As opposed to our first fish dish, which ended with making the sauce, this one began with making its tangy sauce. Oil, water, paprika, turmeric, salt, pepper, and coriander were beaten together and then poured over our flounder to marinate it for half an hour.

Meanwhile, we lightly rinsed our pickled lemons and layered the slices in a baking dish. The marinated fish and its brightly colored sauce were placed on top of the lemon slices, which was then baked at 425F for 20 minutes.

This dish packed quite a punch in both color and flavor and we were quite careful about plating due to the turmeric in the sauce (which was anxiously waiting to drip onto our white countertops and forever be a reminder of tonight’s meal). Despite being a threat to our kitchen counters, the turmeric was a great compliment to the briny lemon and flakey flounder. And just like our above fish dish, this too proved to be a nice pairing with our starchy side of the night, as the creamy rice was balanced out by this very acidic fish dish.

We travel across the Mediterranean Sea to Italy for our starchy side dish of the evening, a literal cake made of rice and cheese. These rice cake recipes can be traced back to the sixteenth century and were often served apart of the first course at Jewish meals. We started the dish by boiling Arborio rice in salted water for 18 minutes until tender.

The tender risotto rice was drained and allowed to dry out a bit in a colander after which it was combined with salt, pepper, nutmeg, lightly beaten eggs, ricotta, and grated parmesan. This mixture was then spooned into an oiled and matzo-mealed springform cake pan and baked at 350F for about 25 minutes until set.

We are not going to lie, successfully releasing the rice cake and flipping it over onto a serving plate made us feel like rock stars (mostly because of our numerous failures in the past). The cake was nicely browned and wonderfully gooey when cut and its following bites did not disappoint. The rice cake was a little bit crunchy, nicely tender, and wonderfully creamy. It was not too salty or nutmeg-y and proved to be the heavier component which was lacking in our very light fish dishes from tonight’s meal.

A butter cookie is called as such due to the high amount of butter in its batter, which often comprises at least 50% of the content of its total sum of ingredients. It would appear that any community that has access to dairy has its own butter cookie recipe, as this dessert can be found from China to Canada and is enjoyed as a treat on a number of holidays. Having a crisp yet creamy texture, they can be unflavored (i.e. butter flavored, which we would argue is one of the best flavors) or accentuated by vanilla, coconut, or chocolate ingredients. They may be rolled out, sliced, shaped, or piped, with their sumptuous fragrance filling your grandmother’s kitchen or their crumbly bites in their signature blue Royal Dansk tin (which would later be repurposed to hold the odds and ends of sewing supplies, at least in our house) signaling the onset of the winter holidays. Whether you buy them or bake them, a butter cookie is truly a thing of comfort and was a welcome way to finish off tonight’s meal.

Following the theme of all of our other recipes tonight, this dish was short on ingredients and quick to make. Butter and sugar were blended together in a food processor after which enough flour was added to create a soft dough. This was rolled into walnut-sized balls, slightly flattened, then laid out on a baking sheet. The cookies were baked at 325F for 25 minutes until just set but not colored.

The butter cookies were tender, slightly sweet, and very buttery. They were easy to mix, quick to bake, and kept quite nicely (well, as far as we know – they did not last very long in our kitchen). We had no complaints about this recipe and would gladly make them again!

So how was Made In Marrow’s meal number 87? As a reminder, our rating system is based on sticks of butter (because butter is best!), with 1 being the absolute worst and 5 being out of this world. Sticks of butter are assigned to Difficulty (how many kitchen fights were needed to complete the meal?), Tasty Goodness (was it a palate poor or did it make our mouths merry?), and Repeat Customer (how likely are we to return to the recipe?).

Tonight’s meal did not require too many ingredients, a whole bunch of preparation, or substantial time spent in the kitchen, so we would call that a win!

[][][] 3/5 Poisson aux Citrons Confits – Fish with Pickled Lemon – Again, but with a carefully picked side

This turned out to be not a bad meal for our return to the blog and we look forward to what the remainder of the fish section of The Book of Jewish Food will bring us!