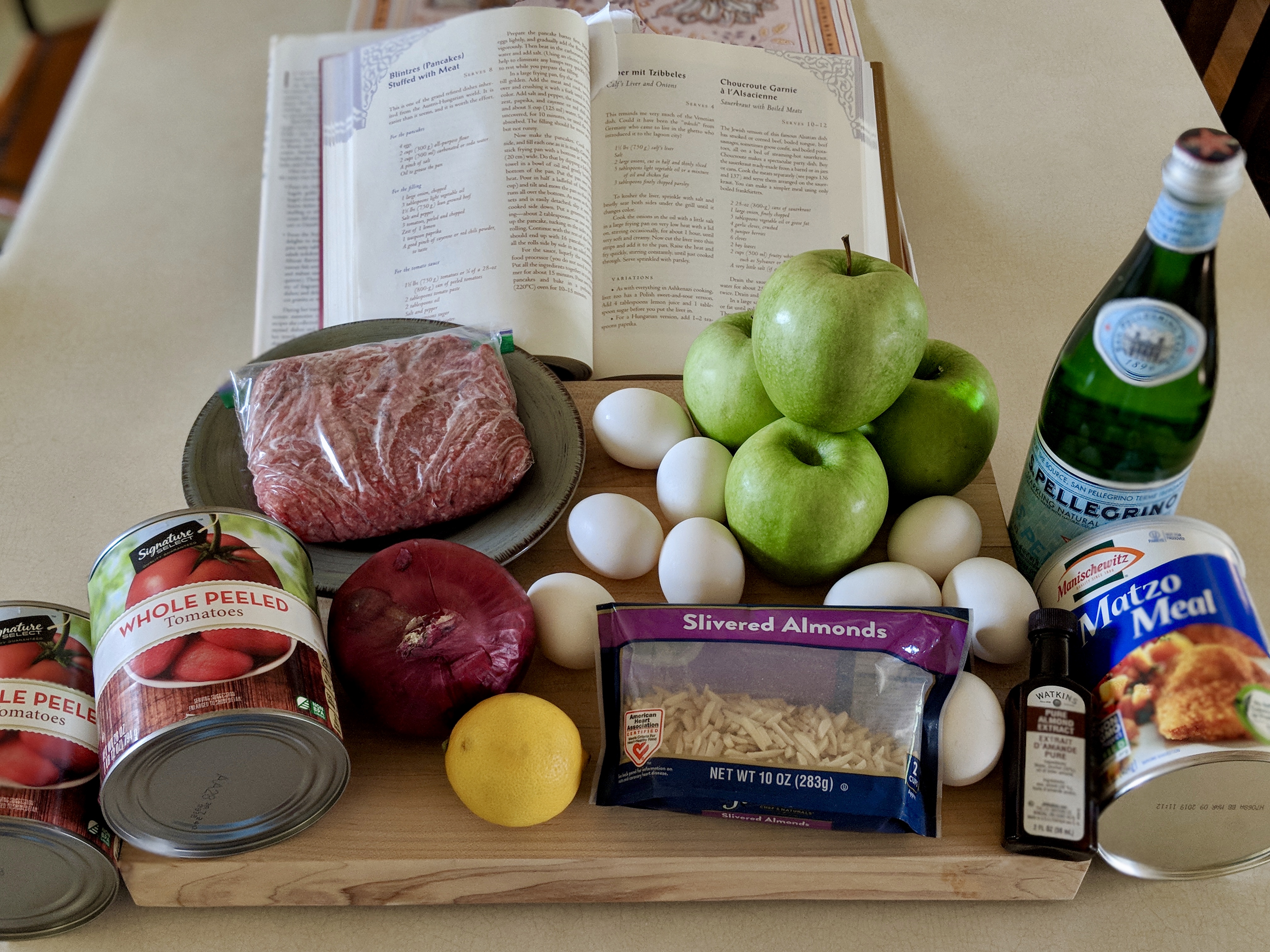 Welcome to Made In Marrow’s 20th meal! In honor of our twentieth meal, we look back at twenty awesome things we have gotten to experience and learn by starting this blog:

We hope you have enjoyed the last 19 blogs – onward to number 20!

Blintzes are a variant of blini, which are Russian in origin and are thin pancakes made from buckwheat. Blintzes were adopted by the Austro-Hungarian world are still thin pancakes, but made from wheat flour, and usually filled with a savory or sweet component (remember our dessert blintzes?) and then fried or sauteed. Eastern European Jewish immigrants are credited with bringing blintzes to the United States and they are typically served on holidays like Chanukah and Shavuot. 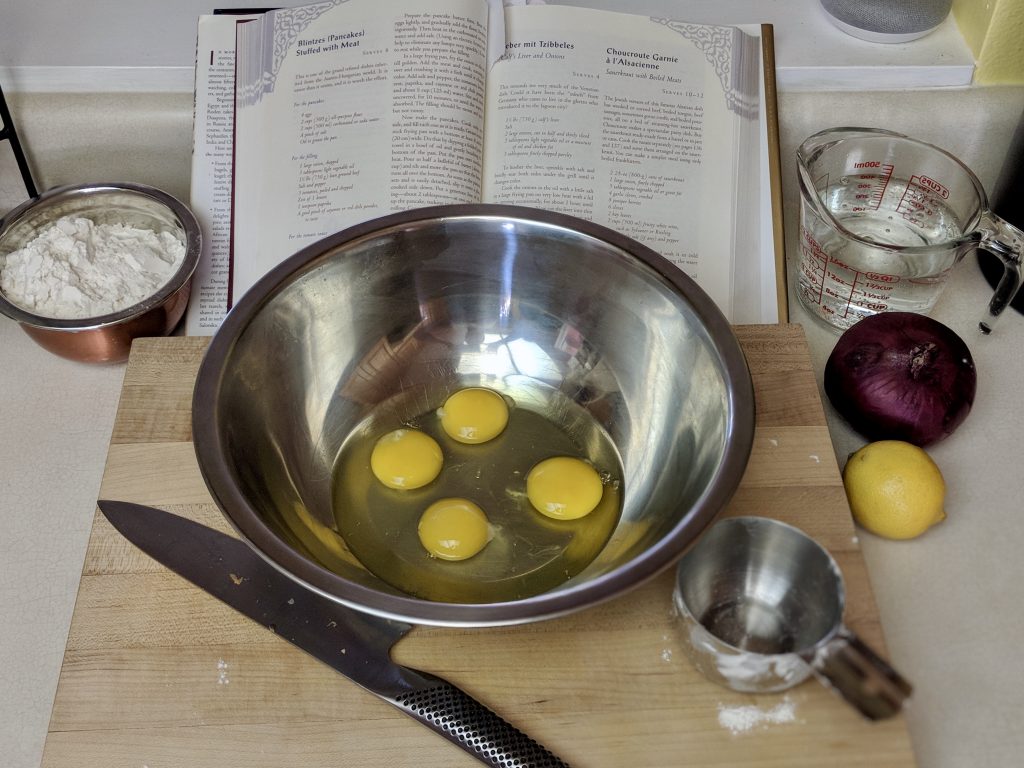 In the Book of Jewish Food, Claudia Roden writes at the beginning of this recipe, “It is easier than it seems, and it is worth the effort”. Despite seeming contradictory (easy, but hard?), no truer words have been spoken. Preparation for the blintzes is simple but time-consuming and definitely made easier by having two sets of hands to speed along the process. It took us about an hour to make these little meat pockets (not counting the baking time) and we could see why these are reserved for holiday feasts and not your average Tuesday night dinner. 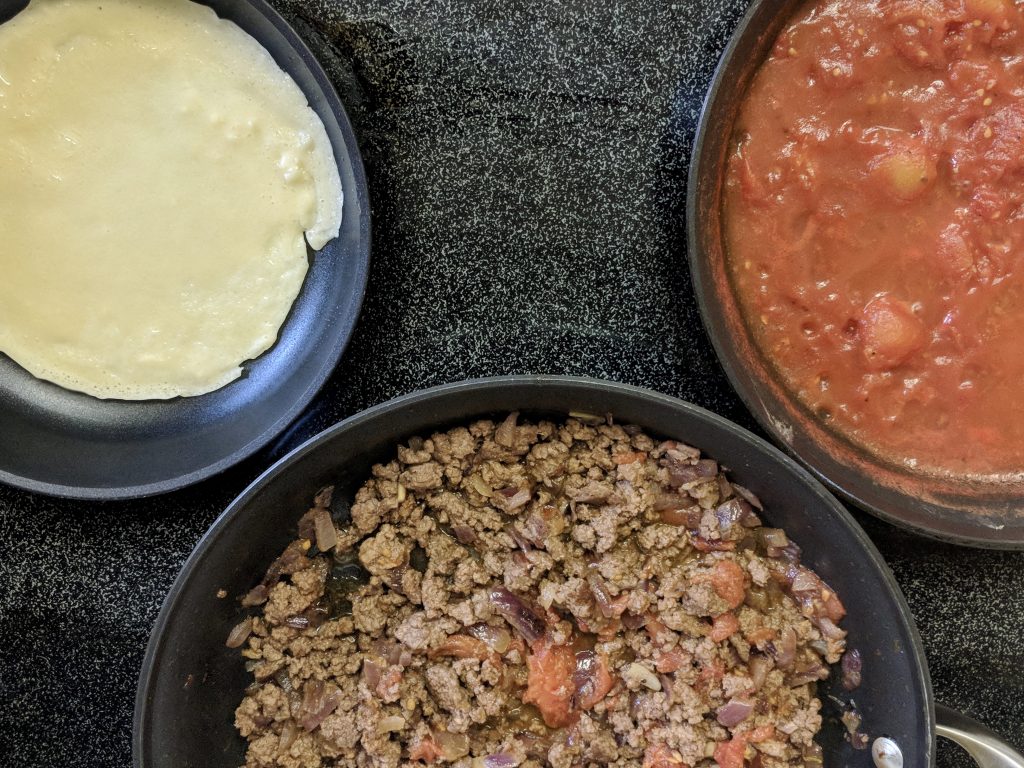 A pancake, a filling, and a very tasty sauce

Gary decided to make the pancake batter this time around (“I’m baking”, he proclaimed as he made a mess with the hand mixer) and combined eggs, flour, carbonated water and salt to make a smooth batter. We then fried the ground beef with onion, 3 peeled tomatoes, lemon zest, paprika, and cayenne to create the filling for the pancakes. Gary created the very thin pancakes by pouring a ladleful of batter into a small pan and allowing it to ever-so-lightly brown on one side. These were handed off to me for filling and rolling into cigars after which they were placed in an oven dish. While we were “baking”, filling, and rolling, a basic tomato sauce simmered on the stove, and once all the pancakes were made (18 in total), this sauce was poured over all and the entire dish went into the oven at 425 degrees for 15 minutes. 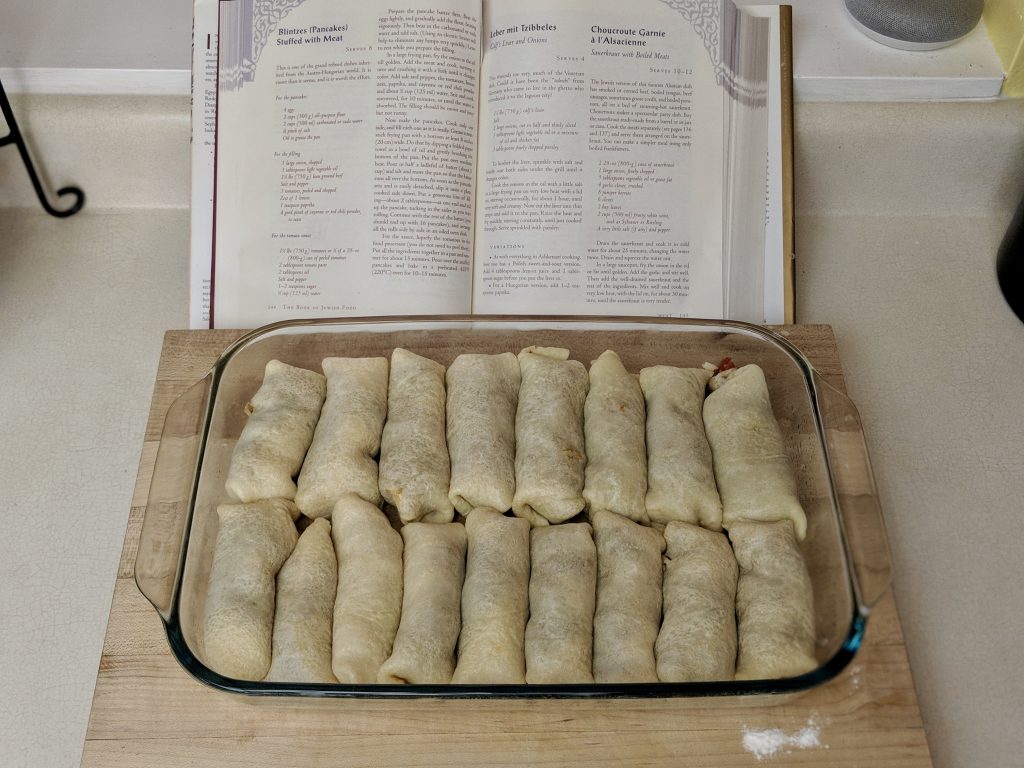 Blintzes to be Baked!

No sides were needed this week because the blintzes turned out to be more than enough. The pancake exterior was smooth and hearty and the beefy filling was salty and savory, balanced perfectly with the lemon zest. The tomato sauce added just enough moisture to the dish, preventing it from drying out and the brightness of the tomatoes added another level of lightness to the dish. All in all, these blintzes were perfect and we cannot say enough about how much the lemon zest really added to each savory bite. And the rolled crepes stood up well to multiple re-warmings as Gary enjoyed these for lunch over the next several days. 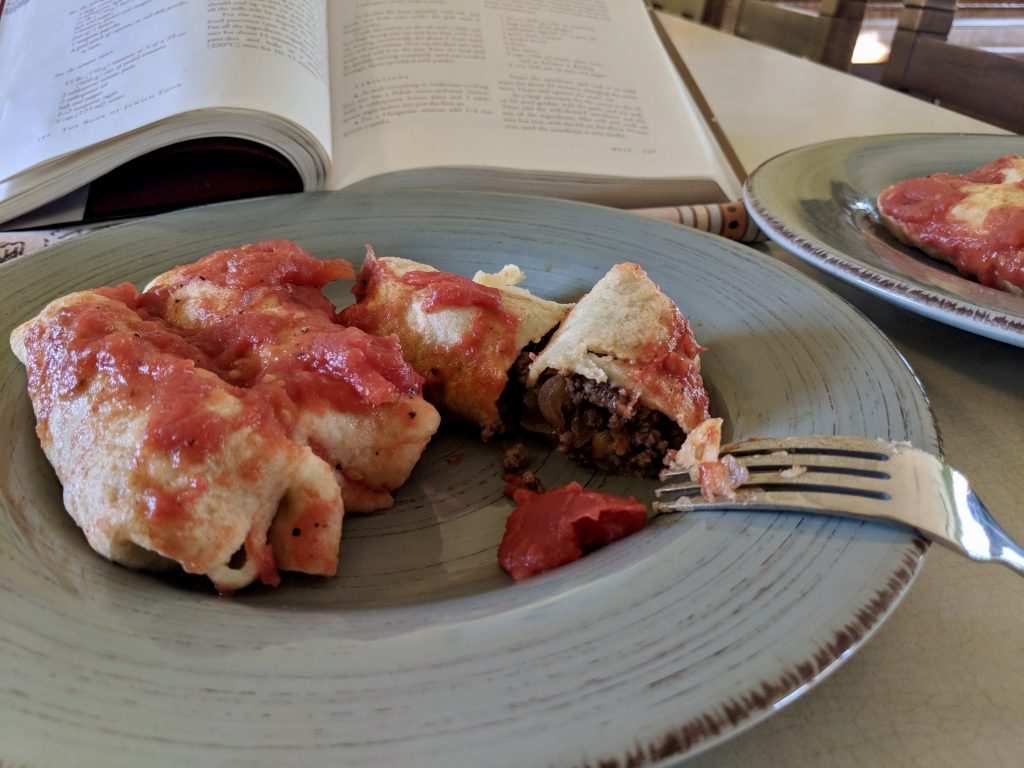 Pesah, the Jewish word for Passover is the holiday which commemorates the Jewish exodus out of Egypt. As we wrote about in previous weeks, Jews believe that because the Hebrews had to leave Egypt so quickly there was no time to allow baked bread to rise. Hence the historical “rising” of flat, unleavened bread, matzo, as a reminder of the rapid departure of the Exodus. Matzo is the symbolic representation of Passover and takes the place of flour and any other leavening agent in this cake. This simple cake integrates Jewish lore with the Northern European standard ingredient of apples to create a pastry that was popular at the turn of the century. 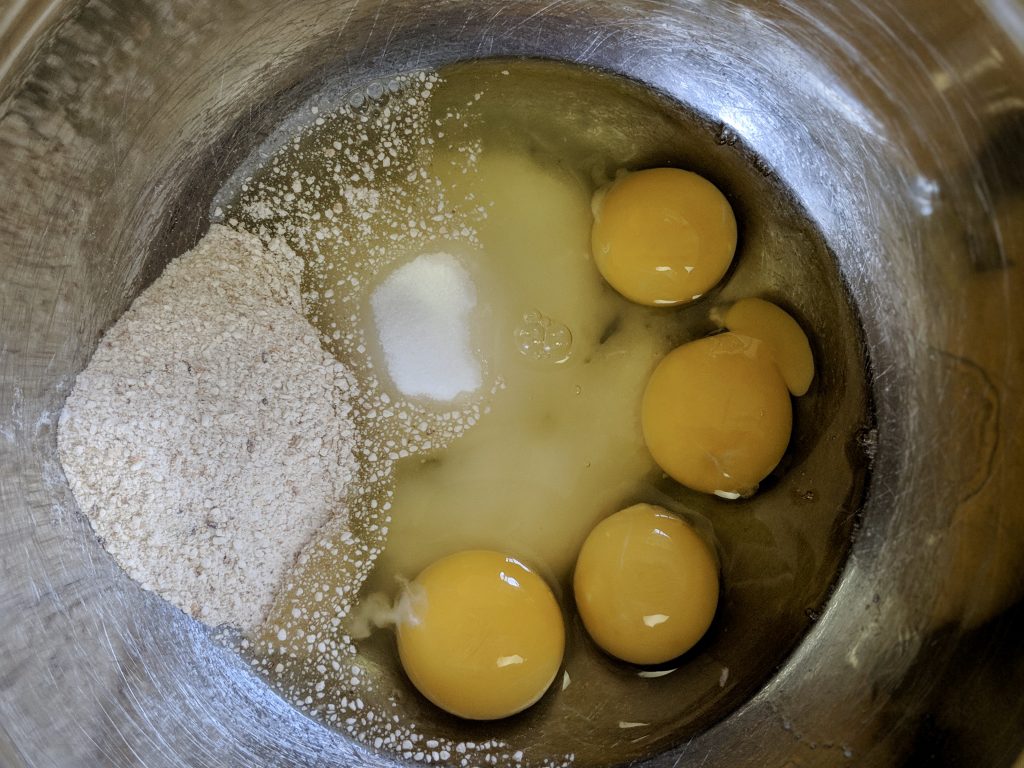 This cake begins with making an applesauce – green apples were peeled and cored and then allowed to steam in a covered pan for about ten minutes. These were mashed and then combined with sugar, matzo meal, and eggs and then poured into a pie plate. So far so good – my cake anxiety was alleviated by a lack of leavening as well as the ease of the cake’s bottom, so on to the topping…which was very messy. Almonds were ground to a paste, along with sugar, one egg and almond extract. After oiling my hands, I did my best to spread this almost marzipan across the top of the applesauce filling, creating a bit of a patchwork paste across the top of the cake. While the paste tasted quite good, it did not look like much and as I put it into the oven I wondered if this was going to be yet another horrific cake disaster… 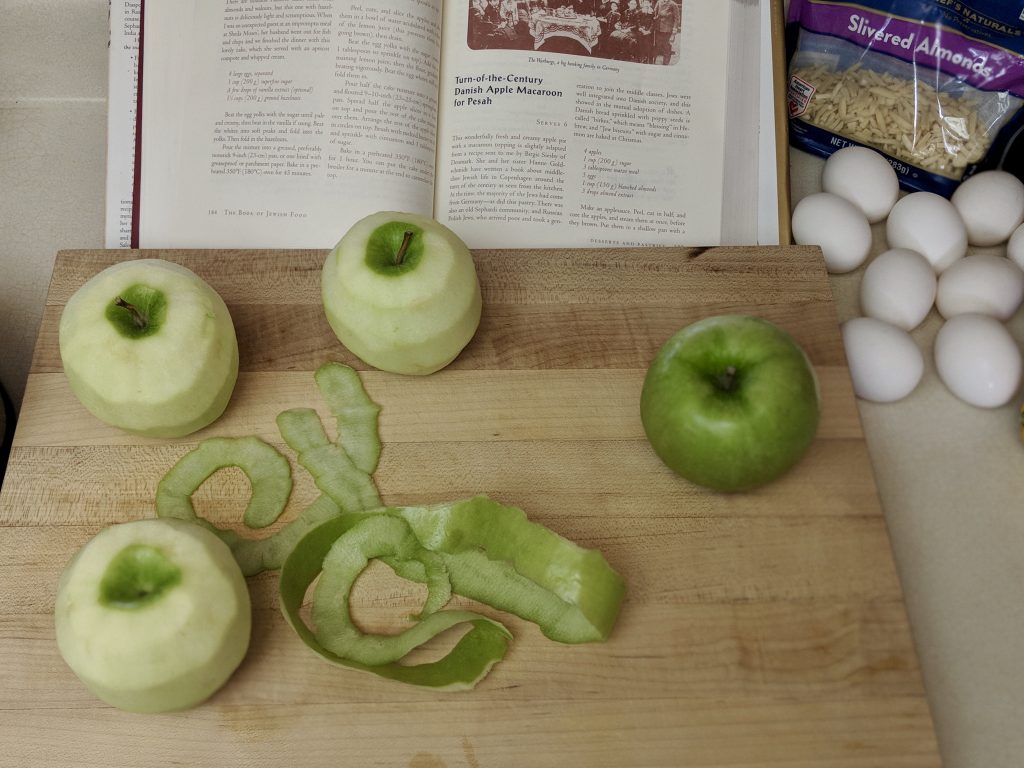 Apples to be Sauced

But I was wrong and this turned out to be excellent! The bottom was like a grown-up version of applesauce, tangy from the green apples but creamy and filling. The macaroon topping was extremely tasty straight of the oven, crispy with just enough almond flavor to balance out the brightness of the apples. Roden recommends eating this warm, and it was very tasty straight of the oven, but it is still tasty as a leftover out of the fridge, the only difference is that the topping is no longer crispy. This was an excellent cake, albeit a little messy to make! 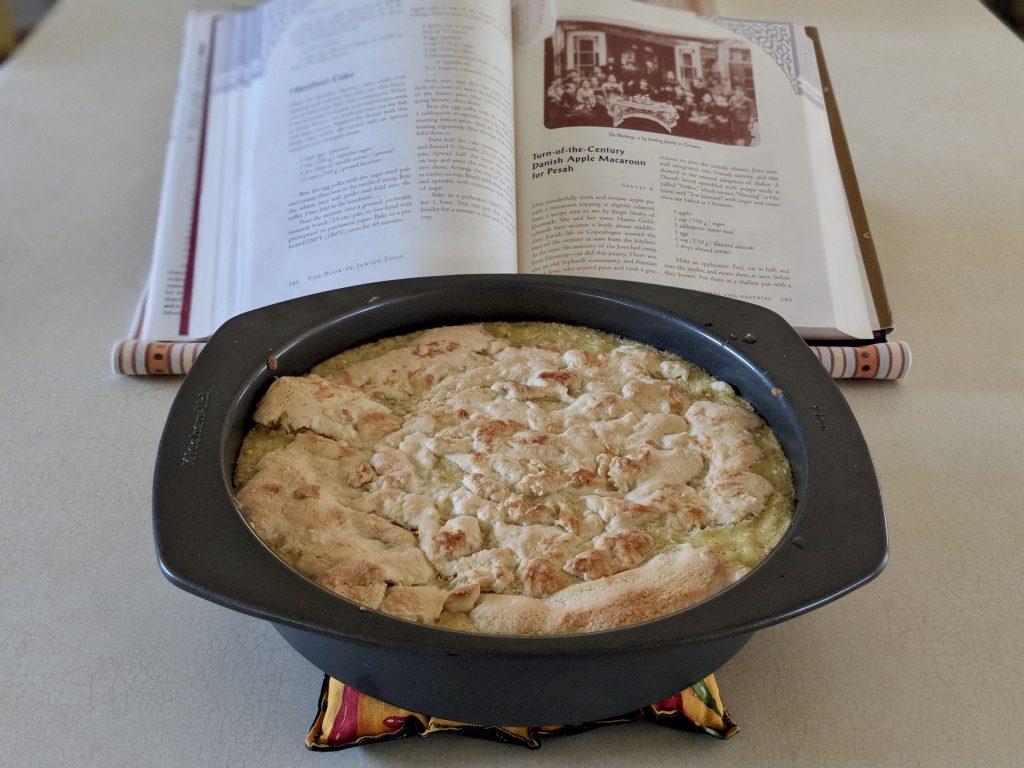 So how was Made In Marrow’s meal number 20? As a reminder, our rating system is based on sticks of butter (because butter is best!), with 1 being the absolute worst and 5 being out of this world. Sticks of butter are assigned to Difficulty (how many kitchen fights were needed to complete the meal?), Tasty Goodness (was it a palate poor or did it make our mouths merry?), and Repeat Customer (how likely are we to return to the recipe?).

The blintzes and cake were easy to prepare but the blintzes definitely took more time than we expected and having two people made the process go significantly faster.

[][][][][] 5/5 Turn-of-the-Century Danish Apple Macaroon for Pesah – An easy cake that we will return to (and do a better job of more evenly spreading the topping next time).

Meal 20 turned out to be absolutely awesome – once again, simple ingredients and a little patience make for a perfect dinner! Look out meal 21, here we come!