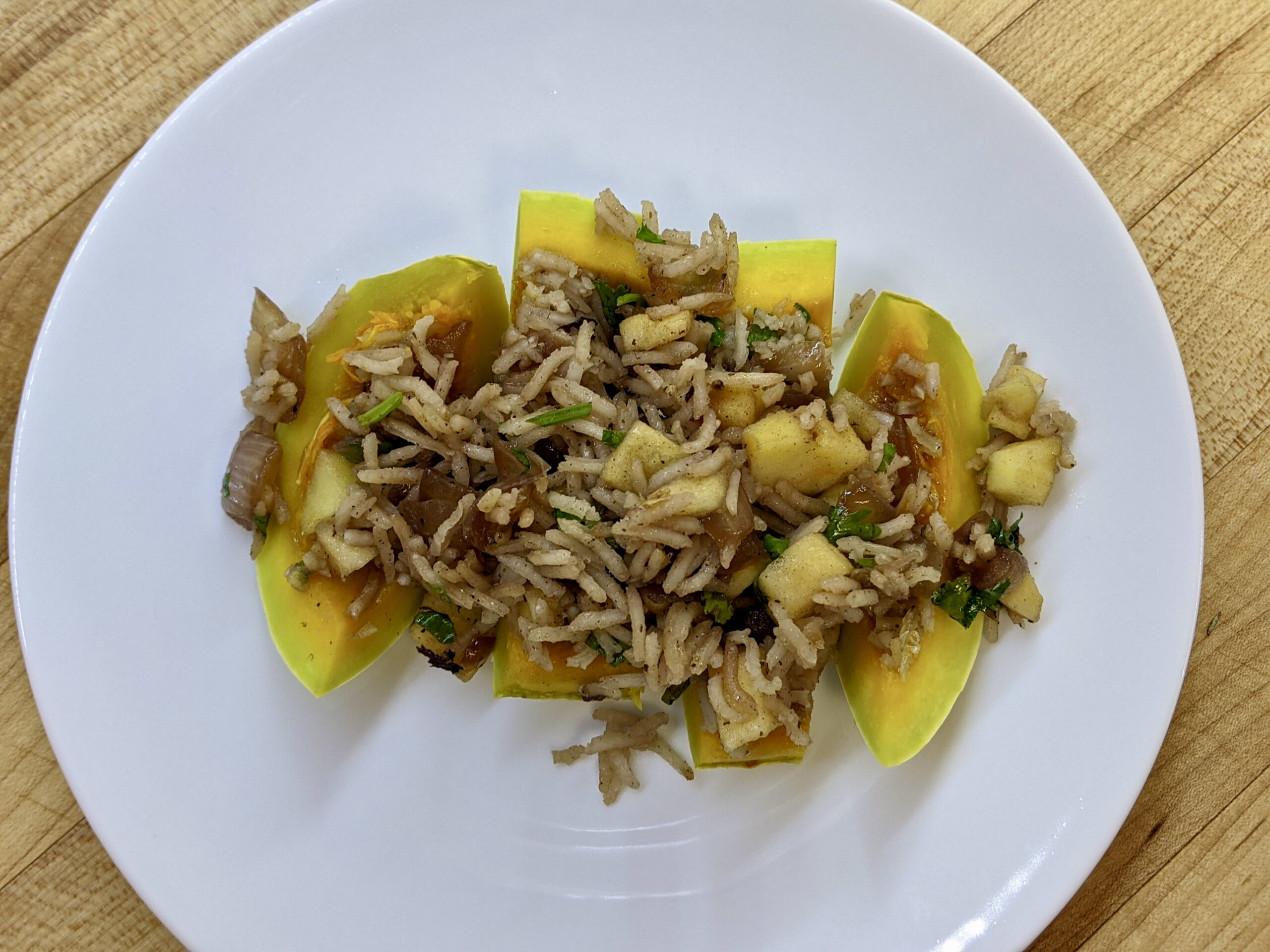 It is hard to believe that it is that time of year again, so Happy Mother’s Day from Made In Marrow! Tonight’s meal is not unlike all of those characteristics that make mothers great – a little sweet, a little spicy, very unique, and extremely comforting. In fact, all of these recipes are celebratory dishes, often made by mothers working hard in the kitchen to churn out massive amounts of food for those they love. So tonight we partake in some very different dishes which have been lovingly made by the ultimate head chefs in kitchens around the world – we hope you enjoy as much as we did (and don’t forget to call your mother!).

In the big Book of Jewish Food, Claudia Roden informs us that this is a festive Bukharan specialty and therefore the recipe begins with a 14 lb pumpkin. Being just the two of us, and having grown a small fleet of ghost pumpkins in the summer garden, we opted for our 1 lb white pumpkin. This can be made with or without ground beef and we chose to go the meatless route, as we had a large meaty stew planned for tonight’s meal.

The dish began by tackling the beheading of the pumpkin, which of course we did ever so gently, mostly because we only had the one pumpkin (and not because we are advocates for the better treatment of pumpkins – who doesn’t love a freshly carved jack-o-lantern?). Our ghost pumpkin turned out to be beautifully orange on the inside, which we gleefully scooped out and saved the seeds for next summer’s garden. The inside of the pumpkin was then sprinkled with salt, sugar, and oil and was set aside to await its filling.

The filling was created by frying onions until golden, after which it was mixed with freshly boiled basmati rice, peeled and coarsely chopped green apples, lemon juice, golden raisins, coriander, saffron, salt, and pepper. This was then spooned into the gutted pumpkin and the filled pumpkin was placed in a baking pan with half an inch of water and baked at 375F for about 2 hours until the pumpkin was soft and the par-cooked rice was tender.

While this was a little challenging to eat with the rind still intact, as it was advised to be cut into slices for serving, it was tasty nonetheless. The green apples added a nice complimentary tartness to balance the sweetness of the raisins. The saffron added a subtly sweet earthiness which emphasized the great flavor of the ghost pumpkin (which was also quite tasty, despite being a disembodied squash). All-in-all this is a fun little dish to make and we can see why it would be a great hit at a festive feast!

For such a simple dish, this recipe has a pretty hefty back story – this Bulgarian pasta salad is served during Purim to observe the Persian Haman’s cruelty toward the Jews. As Roden informs us, black olives and hard-boiled eggs are symbols of mourning in the Sephardic culture, which are the main components of this recipe.

Spaghettini was boiled until al dente, after which it was drained, then dressed with olive oil, lemon juice, salt, and pepper. Black olives were mixed in along with hard-boiled eggs cut in wedges.

Served at room temperature, we really did not know what to expect. However, we were pleasantly surprised – despite this not being a very complex or ingredient-heavy recipe, the black olives and lemon juice added a nice tartness to balance the richness of the egg and hearty noodles. We are not sure that we would make this again in the future, we did enjoy eating this new and different dish!

Like our pasta salad from tonight’s meal, this dish was also served in sizeable portions during Purim in Morocco. Fava beans are often eaten during Passover because these were eaten by the Hebrews while they were slaves in Europe. Fava beans were a key component of the Mediterranean diet, with their use in Old World agriculture helping as a cover crop to prevent erosion, fix nitrogen levels in the soil, and they also overwinter quite well as a legume. Their harvest season also coincides with that of new green almonds, which are an additional (and interesting) component of this dish.

To start, our little lamb chopped pieces were browned, after which enough water was added to cover the meat and brought to a boil. The soup-to-be was seasoned with salt and pepper and then simmered for 2 hours. In a separate pan, onions were fried until golden after which almonds and fava beans were stirred into the mix along with a little bit of honey, and then the pan’s contents were poured into the soup pot. This simmered for 15 minutes until the almonds and fava beans were tender.

This was an extremely earthy dish, with the savory lamb being complimented by the creamy fava beans and just slightly crunchy almonds. Though an odd mix (for us at least), this was a tasty and hearty stew with an extremely unique texture and flavor profile.

Like our other unique dishes from tonight’s meal, this Syrian specialty is a vegetable jam whose texture is a little bit like eating a vermicelli dessert. It seems a little poetic that we started our meal and ended it with squash, both having slightly sweet but also very hearty comments to the dishes.

The dessert was started by halving and cooking the spaghetti squash in the oven until tender. It was then shredded with a fork and weighed – this dish is less of a recipe and more a mathematical balancing of components, as the weighed squash was mixed with sugar to its weight.

The sugar and the squash sat in the pot for an hour to draw out its juices and then it was cooked over low heat for 10 minutes. A small amount of orange blossom water was mixed in with the tender threads and the jam was served over mascarpone.

Again, we really had no idea what to expect from a vegetable jam served over cheese. And yet again, we were pleasantly surprised. The texture was definitely odd, but not off-putting and the squash was lightly savory and just the right amount of sweetness. The mascarpone base was a wonderfully sumptuous treat and while we are not sure we would make this again, we were definitely glad we tried it!

So how was Made In Marrow’s meal number 98? As a reminder, our rating system is based on sticks of butter (because butter is best!), with 1 being the absolute worst and 5 being out of this world. Sticks of butter are assigned to Difficulty (how many kitchen fights were needed to complete the meal?), Tasty Goodness (was it a palate poor or did it make our mouths merry?), and Repeat Customer (how likely are we to return to the recipe?).

While not terribly challenging, this meal required quite bit of hefty slicing as well as lots of oven and simmering time.

Tonight’s dinner was different but turned out to be a super supper of celebratory origins – we again wish everyone a Happy Mother’s Day (and don’t forget to call your mother!).